This article deals with the pages of history to find out why Calcutta’s 16 Bosepara Lane has been declared a Heritage Building.

“My home is, in my eyes, charming” writes the illustrious resident of 16, Bosepara lane, Calcutta at the dawn of the last century. “With its two courtyards, its limited second story, and its quaintly-terraced roofs, built at five different levels, it is a rambling specimen of the true old Hindu style of building. In the whole place there is not an inch of glass: the lower casements are protected by iron and the upper by wooden bars, and so, while the sunlight outside my little study is softened by mats made of dark green splints, my bedroom is always open to the stars”. A house, she describes “crowded with memories” still stands. The house by the lane that twists in and out of the pages of history. On the threshold of this century, it brings to life the remarkable woman who once graced its portals and immortalized it. Sister Nivedita, the spiritual daughter of Swami Vivekananda is a living presence here.

Sister Nivedita’s name was Margaret E.Noble who was born in Ireland on 28th  October 1868. she had met swami Vivekananda in London in 1895, she was inspired by the philosophy he preached and decided to dedicate her life to India. She arrived in Calcutta in February 1898.  She was initiated to Brahmacharya vows and given the name Nivedita – ‘the dedicated’ by Swamiji. She was trained for the next eight months so as to reorient her thoughts and outlook to feel one with the Indian women. The woman who inspired many and gave her all to India’s awakening. The house remembers

It was not easy to procure a house for an English woman in the native quarters of Calcutta. Somehow the house at 16 Bosepara lane, Bagbazar could be taken on rent on 1st November 1899. Nivedita moved around the lane, her mind busy with plan by setting up a school for girls in the area. Her neighbours were curious at first, intrigued by the appearance of a blue-eyed, golden-haired white woman in their midst. But then… there she was crying over a starved child dying in her arms. There she was lending solace to a bereaved woman with gestures of comfort. There she was walking around the clock in the slums with money and food as offerings for the deprived lot.

On 13th November 1898, it was in the same premises that  Nivedita started her school which was inaugurated by Holy Mother Sri Sarada Devi in presence of Swami Vivekananda and his brother disciples. This is the first and only women’s education started by Ramakrishna Order during Swamiji’s lifetime and in his presence. It was the first school imparting national education to women in the line of Indian tradition blending it with theing the best knowledge of Western culture . But it was not an easy beginning. Hurdles cropped up at every step. Nivedita went from house to house pleading, cajoling, explaining to the elders to send girls to her school. While teaching young girls she adopted methods using materials locally available, like tamarind seeds, models in clay prepared by the people themselves for teaching Mathematics and so on.

There was an epidemic of plague in March-April of 1899, the house remembers. Sister Nivedita started her relief work from 16 Bosepara lane. She wrote an appeal to the citizens of Calcutta which was translated into Bengali by Girish Chandra Ghosh. She organized a group of young men and started cleaning the streets of Bagbazar. She nursed the afflicted never caring about her health.

In those early days it was an unending struggle to run the school. The school actually had to close down a few months after its opening due to paucity of funds. Nivedita went abroad to collect money and came back to India in 1902 and restarted the school. On returning from the West, Sister Nivedita hired 17, Bosepara Lane in 1902 but as the work expanded the house at 16 bosepara lane was also rented again in 1904. The houses being also the residence of Sister, steady stream of luminaries for all works of life filled up her little room – be they politicians, poets, scholars, scientists, historians or statesmen. Her visitors not only included many highly placed British men and women like Ramsay Macdonald and the then vicerein Lady Minto but also several national leaders who looked up to her for inspiration.  Irish–born Margaret had become a flaming emblem of Indian nationalism. She always reminded her girls that they were daughters of Bharat Varsha and when the singing of Vande Mataram in public was banned by the government, she introduced it in her school.

There is a big list of names of distinguished visitors to that house. Some of them were Jagadish Chandra Bose, Rabindra Nath Tagore, Nandalal Bose, Aravinda Ghosh, Bipin Chandra Pal, G.K.Gokhale, Bala Gangadhara Tilak, Subramaniya Bharati, Jadunath Sarkar, Radha Kumud Mukherjee, Ramananda Chatterjee, William T. Stud, S.K. Ratcliffe, etc. Her house was a haven for men of thoughts. The house remembers – how in one afternoon in a gathering party contemporary giants came face to face with each other: Swami Vivekananda, the all–conquering spiritual hero who was Nivedita’s spiritual mentor, and Rabindranath Tagore a king among poets.  The description of this gathering of great men is found in a letter of Sister Nivedita written on 13th January 1899. In this house Holy Mother Sarada Devi lived for 3 months from November 1902, so the house is also blessed by the Holy Mother’s stay.

Nivedita was greatly interested in the revival of Indian art. She wrote in a letter “the rebirth of the national art is my dearest dream. When India gets back her old art, she will be on the eve of becoming a strong nation”. She had relentlessly written on varied aspects of Indian culture, education, artsforms, empowerment of women, to name a few.   She inspired the artists namely Nandalal Bose, Asit Halder, Abanindra Nath tagore and many others. Asit Halder said , “ …  in our hands rest the task of rejuvenating the lost art of our country – and that is the major responsibility in the process of India’s re-awakening and independence. That is what she used to tell us.”

Ravindra Nath Tagore wrote, “…. She is to be honored not because she was like us but because she was greater than us”. Nivedita immensely helped Acharya Jagadish Chandra Bose in his scientific works because she had  firm faith and believed, in Acharya Jagadish, that his work will place India in a glorious position in the world. Once Jagadish Bose and others asked her to shift to a healthier part of the city when she was precariously ill, Nivedita replied, “How can I leave the lane that first gave me the shelter?” The house remembers. In the houses 16 and 17 Bosepara lane the Sister Nivedita School functioned still 1922 when the school was shifted to its own building at 5, Nivedita Lane, Kolkata – 3 which is the present address. 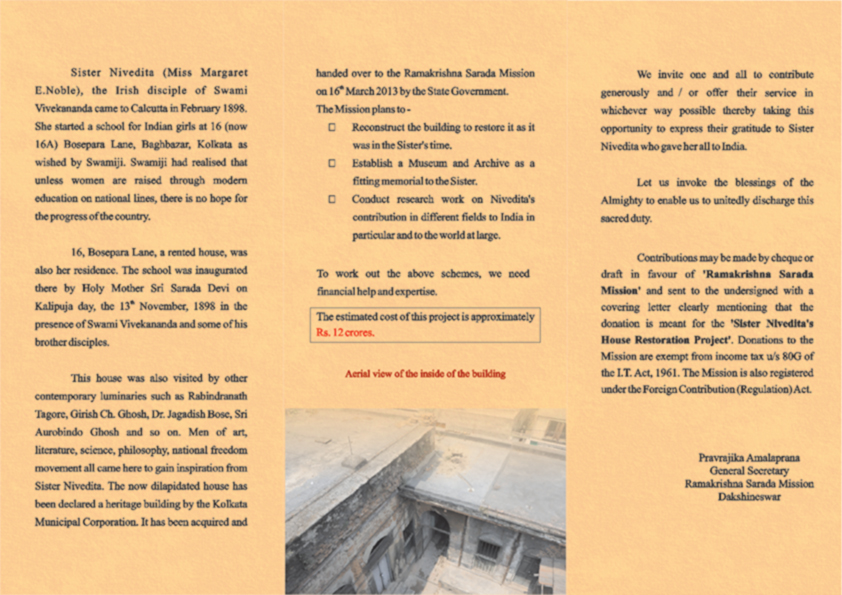 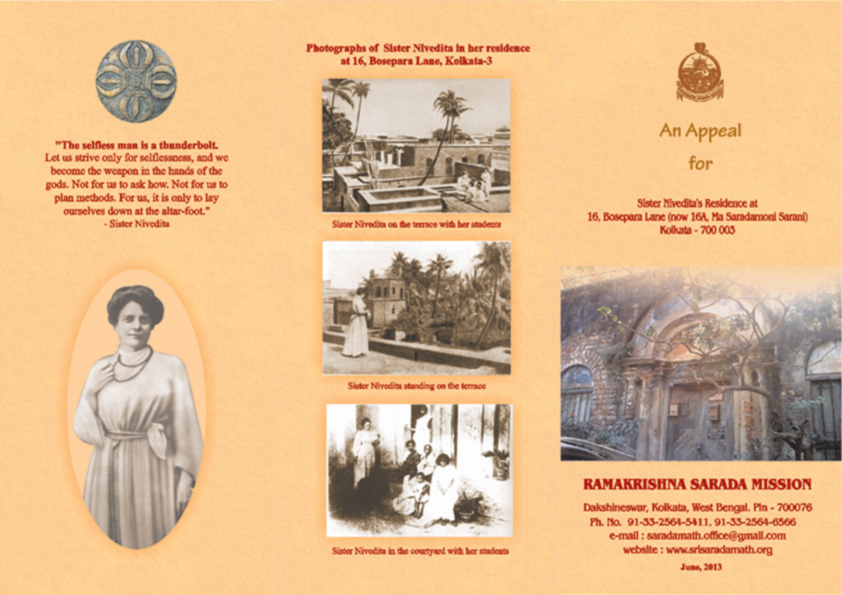