Until 1946 the map of Greece kept changing shape with small regions moving in and out of the conglomeration of independent states. A civil war followed in the aftermath of World War II. Two decades of democracy ended abruptly when the Greek coup d’état took place on 21 April 1967 [Friday, Śukla Dvādaśī (Me), Pūrva phālguṇa nakṣatra], just weeks before scheduled elections, when a group of right-wing army officers led by Brigadier General Stylianos Pattakos and Colonels George Papadopoulos and Nikolaos Makarezos seized power in a coup d’etat. This coup occurred just a few days before the total lunar eclipse of April 24, 1967 (Svātī Nakṣatra).

People of Greece are basically freedom loving and Athenian Democracy is an old concept. There were many revolts and in November 1973 students occupied the Polytechnion of Athens revolting against the military regime. The military government in Greece has collapsed in 1974 and the former prime minister Konstantinos Karamanlis returned from Paris where he was in self-imposed exile. Karamanlis was sworn in at 4:00am of July 24, 1974 in Athens as prime minister and this is the ‘Democracy Chart for Modern Greece’. 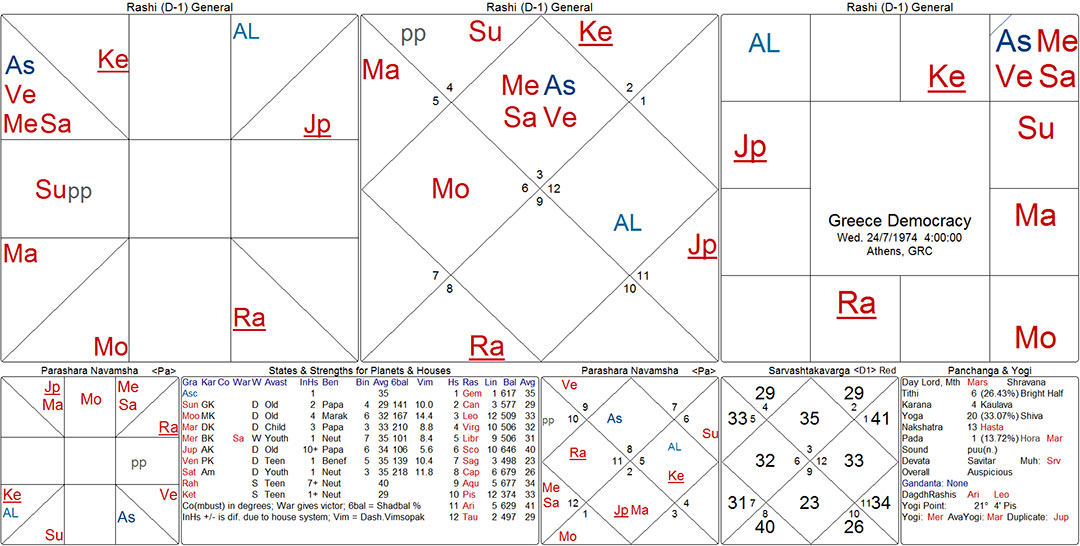 One point that strikes the mind immediately is the weakness of the lords of the ninth house Aquarius – Saturn is in maraṇa kāraka sthāna in lagna while Rāhu is in debility in the sixth house. But the dharma bhāva is strong with a retrograde Jupiter blessing the chart. Two elements of the past will end while a new Jupiter rules the heavens. Rāhu in debility in Scorpio is the end of the military dictatorship while Saturn in maraṇa sthāna shows an end to the old royalty. Previously the monarchy had been abolished in 1973 and in a referendum on the issue later in 1974 Greek voters rejected re-establishing the king and voted for a presidential system. Accordingly after the November elections, when his new party, the Nea Dimokratia came to power, Karamanlis founded the Greek Republic with a new constitution in 1975. The main objective of Karamanlis was to bring Greece into the EEC which he finally did in 1980 in the very first Nārāyaṇa Daśā of Gemini having a powerful rājayoga of the lagna and fourth lord Mercury conjoining the lords of trines Venus and Saturn. The EEC was also known as the Common Market in the English-speaking world and sometimes referred to as the European Community even before it was officially renamed as such in 1993. This is the first pillar of EU (European Union). 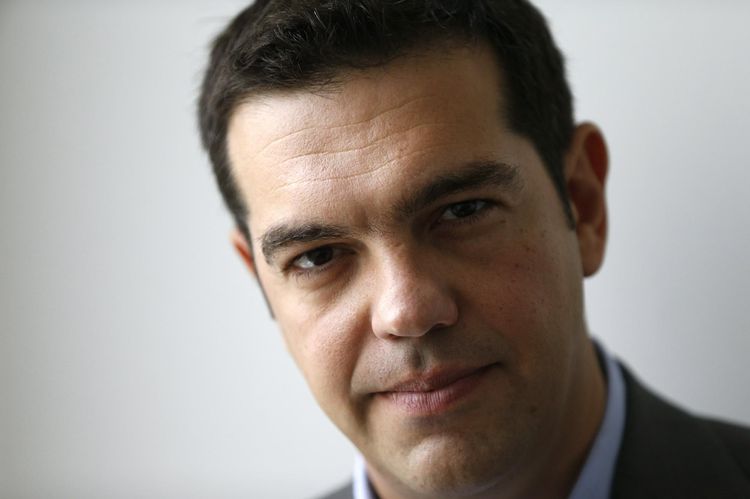 Today the Greeks are celebrating the victory of the Left-wing party leader Alexis Tsipras, who wants to renegotiate Greece’s debt. They are calling it a rewriting of Greek history. The BBC says that “Anti-austerity Syriza party has won Greece’s general election, putting the country on a possible collision course with the EU over its massive bailout.”

If we look at the chart, the striking feature is the fifth house rājayoga showing a fun-loving (Venus is fifth lord) happy-go-lucky (Venus conjoins Mercury in Gemini) people who eat excellent food (Moon in digbala in 4th house) and are very strong, being blessed by the Mother Divine (digbala Moon).

What is unfortunate is the Scorpio Nārāyaṇa (2008-17) has not ended and the rioting and fire that started in winter of 2008 continues in the hearts of the people. This is the sixth house of ṣaḍripu (six weaknesses) where a debilitated Rāhu causes the mind to become very confused, particularly in matters of dharma (righteousness) as it is the co-lord of the ninth house.

Rāhu got into action as soon as Scorpio daśā started in the summer of 2008 and started fomenting dissent and mistrust. On 6 Dec 2008 when the Moon was in Śatabhiṣaj nakṣatra, a day ruled by Rāhu, Alexandros Grigoropoulos a 15-year-old Greek student, was killed by two policemen and Greek riots started resulted in large protests and demonstrations, which escalated to widespread rioting, with numerous rioters damaging property and engaging riot police with Molotov cocktails, stones and other objects. Demonstrations and rioting soon spread to several other cities, including Thessaloniki, the country’s second-largest city. Outside Greece, solidarity demonstrations, riots and, in some cases, clashes with local police also took place in more than 70 cities around the world! Rāhu had raised its hood and hissed venom in the air. There was a global economic depression and no single government can find a magical solution to the problems they create. People are the same everywhere – some slightly more docile others more heated. It all depends on the food and ‘daśā’.

Honestly, people are expecting some sort of miracle. Look at what has been happening. Greek financial crisis started in 2010, a year after the demonstrations. The elections of May 2012 did not get any result, so they had another election in June 17, 2012. A pro-bailout party in Greece won the votes but could not deliver the nation from the coils of the giant snake (Rāhu) that has a firm grip on the nation in the sands of Scorpio where there is no water to quench the fire that burns their throats nor any rain to bring prosperity.

Acronym meaning the ‘Radical Coalition of the Left’
Syriza was formed in 2004 as an umbrella group
Led by 40-year-old Alexis Tsipras
The party first came to prominence following the 2008 Greek riots
आजीविक (ājīvika) Philosophy: Eat ghee even if you have to die in debt, for who knows what happens after life.

Syriza promises an end to Greece’s painful austerity measures and wants to renegotiate its debt. Markets worry about a Greek debt default and a possible exit from the Eurozone which is unlikely as the yoga of Mercury, Venus and Saturn is very strong in Lagna but is presently weak being in the eighth from the daśā rāśi Scorpio. By the way, Syriza says it wants to keep the euro! Why? It’s the perennial water source during these hard times. Who in his right mind wants to let go of a hen that lays golden eggs every once in a while. If the eggs are not forthcoming, squeeze the hen and it will fall out.

Don’t expect Syriza to deliver a magic recipe during this Scorpio daśā which continues till the summer of 2017. The real changes will happen only in 2017-19 during Sagittarius Nārāyaṇa Daśā and Greece will have prosperity and become debt free in the years that will follow from 2019-26. What the world needs to do is to realise that Greece is passing through troubled times. They fight a giant snake that grips their consciousness and it is wise to lend a helping hand, to be with them in these times. A friend in need is a friend indeed. Let us be the friend they need today and tomorrow, that is after 2019, they will prove to be great friends.

Exactly as expected and foretold, the Greeks voted for self-respect.


Facebook Timeline Discussions:
Narayana Dasha works. The Greeks are not in amy mood to continue with their emasculation. They have started on the path of ‘self-respect’ and are likely to continue …with a NO vote. When Devani was hoping for some sort of breakthrough in April, I was surprised. Why would they yeild?
What they owe Germany is a miniscule of the amount that was physically looted from Greek Banks in WW-II …and Germany has never returned this loot. Someday they (Germany and Greece) have to settle this karma. Thats the future. For now, most Opinion Polls gave a slight margin for YES vote, but we think it maybe a NO vote thats going to made on 5 July, 2015 when the Moon is in Dhanistha Nakshatra supported by a strong rikta tithi (chaturthi) More on BBC
Sanjay Rath

Final Results
Greek voters have decisively rejected the terms of an international bailout. he final result in the referendum, published by the interior ministry, was 61.3% “No”, against 38.7% who voted “Yes”. Greece’s governing Syriza party had campaigned for a “No”, saying the bailout terms were humiliating. More on BBC