The tradition of Shakti worship in India can be traced back to the period of antiquity. Shakti is the mother of Universe the highest primal power transferred to powerful Goddess representing the creative force, Matrika, later developed to Shakti or Prakriti under various names of Sati or Devi (Durga / Parvati)ad depicted in Puranas and other historical books of classical tantra literature. There are a number of important Shakta centers (called pitha) in India and among these Orissa has been considered to be one of the most important Shakti centre as north Orissa was traditionally called Udra desa (land of the Udra) who were the experts in Uddisa tantra.

Location
Tara-Tarini located atop the Kumari hills on the south bank of River Rushikulya, is near Purushottampur in Ganjam District. It is one of the most ancient Shakti pitha of Orissa. Situated at a distance of 30 Kms towards north of Brahmapur (Berhampore) it is accessible by motor transport. The hill is about 708 feet high spreading over 180 acres. Popularly known as Tara Tarini parvata (hill) and is surrounded by natural.
Access
There are 999 steps on the front side of the hill leading to the temple with the 1000th step being the base of the temple. Pilgrims are expected to recite Her name a thousand times (or a thousand names) before reaching Her abode from the foot of the hill as they climb the 1000 steps. Less able pilgrims can access her shrine using a motorable winding road arriving at the back of the temple. Modern amenities like bottled water, soda and small bites are available. You can buy a meal at the counter and would be served the Prasad (food offered to the Devi Tara-Tarini). There is a local market at the site with articles of puja /archana and you don’t have to carry anything except your faith. This market is ONLY run by ladies as per the standing orders of the Goddess Tara!
[mappress width=”100%” mapid=”2″]

The Temple
A beautiful temple houses the shrine of Tara-Tarini Devi. It is impossible to date the worship and this is definitely very ancient. The idols of the Goddesses Tara and Tarini are two stones anthropomorphized by the addition of gold and silver ornaments and shaped to seem like female human faces. These are the original natural stone idols. Two bejewelled beautiful brass heads are placed near them and are the representations of Tara and Tarini (called Chalanti Pratima) used for fairs and festivals. Historians believe that from a tribal cult Tara-Tarini have been transformed into Shakti cult through the process of aryanisation! The aryanisation theory of Max Mueller has already been debunked by the BBC and we wonder what shall ever remain of the writings of these historians.

Background
Goddesses Tara-Tarini have been regarded as the protector deity in almost every house in South Orissa. At the time of the invasion of Asoka of Magadha (modern Bihar), the capital of South Orissa was about 4km from this shrine. Evidence of this is seen in the special rock edict of Asoka found at Samapa (modern Jaugada) which was the southern capital of Kalinga. Although there is no evidence of Buddhism in this edict, historians infer that the Tara tantricism of Mahayana Buddhism has its roots at this shrine based on a small image of Buddha in its meditating sitting posture, present inside the sanctum sanctorum of the main temple. 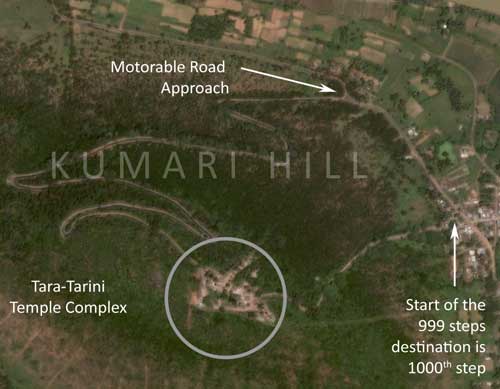 The maritime history of Kalinga also suggests Tara worship by the Sadhavas (merchants and sea-farers) before launching on their sea voyage. Although not now, in ancient times river Rushikulya was conducive for river navigation. Ruins of a brick foundation at village Mukundapur on the south bank of river Rushiklya at the bottom of Tara-Tarini hill and the ganda (deep river point) adjacent to these constructions point at flourishing maritime activities and link the sea-farers to Tara-Tarini. Tarini derived from tarana, specifically means to cross over like crossing a sea, river or the seven spiritual oceans as well.

Pahada is the resting time of the deity observed twice (a) Afternoon siesta 12.35 – 2.15 PM. and (b) Sleep 9.45 PM. to 5 AM. During festivities this is forsaken and the deity sleeps for just five hours – midnight to 5 AM

Balamukhi is parsva devata. I wonder if this still exists in the new temple

Don’t have to walk the steps nowadays – there’s a new ropeway! Hope they can have a ropeway to heaven!

simplicity is the hallmark of the brahmins of Odisha – pure and clear heart
Pauranic Legends
Anything as old as the Tara-Tarini shrine must have a lot of legend and folklore associated. The puranic tradition (first record in Daksha Yagya Chapter of Kalika Purana) connects the Shrine to the Daksha Yagya where Goddess Sati (the pure one) spouse of Shiva immolated herself in the fire of the sacrifice of her father Daksha Prajapati. Her body broke into 108 parts that fell all over the Indian subcontinent – the Mother Land. Her limbs symbolising her strength and the power of action, fell on the Kumari Hill from which the famous Shakta Pitha of Tara-Tarini originated. The two faces are symbolic of the two limbs, the right and left.

Reason for the immolation was the deliberate neglect of his daughter and her husband Lord Siva by Daksa Prajapati as he thought them to be poor and not clean for the purpose of his fire sacrifice. When Devi Sati learnt of the fire sacrifice being held by her father from Narada, taking the permission of her husband to visit her father, she arrived at the Yangya site and enquired of her father, the reasons for ignoring her husband. Daksha spoke insulting words about Lord Siva which she could not tolerate and ended herself by immolating herself by yogic practices with the prayer to be born to a decent father.

Learning of this, Lord Siva was overtaken by grief at the loss of His beloved and created Virabhadra and Bhadra-Kali who led the Nandi and gana to wreck havoc on the sacrifice. Siva carried her body on his shoulders and then as he got angry, started the terrible dance of complete destruction – the Rudra Tandava (nritya) as moved around. On the request of the Devas, Brahma and especially Vishnu, Shani (symbolised by the Saturn graha) entered the corpse of Sati and disposed it in 108 parts (Devi Bhagavata). Shakta Pithas sprang up in the places where the organs of Sati fell. The Kalika Purana instead, states that Vishnu used the Sudarshana Chakra to cut the body into 51 pieces. Our tradition believes that these are the 51 alphabets of the Sanskrit letter (50 alphabets + om). Both versions are correct and have separate spiritual meanings related to creation.

With the weight of the body falling away and the night of horror ending, the anger of Siva subsided and he restored all back to life and even Sati reincarnated as Parvati. This is explained so beautifully in Kalidasa’s Kumarasambhavam as well as so many Tantra and Purana literature. Even Daksha was restored back to life with the head of a goat – human body and animal headed deities are symbolic of return of wisdom by the grace of guru and are called veda mürti i.e. icons of the Veda. This specific form is associated with Ajaikapada, the goat headed form teacher of Sama Veda. Other similar deities are – Ganesha – elephant head [All Veda], Nandisvara – ox head [Rig Veda], Hanuman – monkey head [Atharva Veda]. Deities like Hayagriva [horse head] and others are associated with other parts of the Veda and Upaveda as well.

It is said that the breasts of Sati fell at the Kumari Hills on the bank of river Rushikulya and thus the famous Tara Tarini Shakta Pitha arose at this place. See picture gallery where the two Kumari hills are seen as the breasts of Sati. The shrine is at the heart center on the left breast (hill).

Various folk legends talk of Tara and Tarini taking human forms as two beautiful girls who sometimes live with their devotees (only those who later become priests) and cause various miracles establish their presence with of the devotee. At times appearing or giving symbolic expressions, events or phenomena (nimitta) to remind devotees about their worship in order to alleviate suffering.

One of such folklore talks of a learned Brahmin Vasu Praharaja who hailed from Kharida Bira-Jagannathpur, a sasan village near Purushottampur. Praharaja was the foster father of the two sisters Tara and Tarini who became great devotees of the Mothers Tara-Tarini. By the divine ordinance of Goddesses Tara-Tarini, the sisters performed a great Yagya and all rituals necessary to properly establish the Shrine at the left hill top in a small temple for daily worship. This is the folk history of the first establishment of a temple.
Festival

The sign Pisces is associated with the twin Goddesses Tara-Tarini just as the two fishes symbolising the sign. The month of Chaitra when the Sun is in Pisces is considered the most auspicious for worshipping Her in the dual form. Cancer symbolising the breasts of the Mother is the fifth sign (worship) from Pisces. The days considered most auspicious are Tuesdays, especially those of Chaitra, which is festival time.