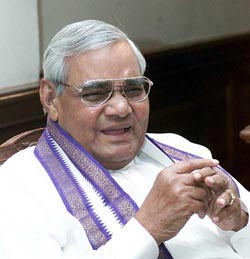 Please note that this is an old article written and published in 1998. It is republished in the website for astrological studies.

The first part of the article titled the Future of India appeared in the Times of Astrology (June 1998 issue) which was available in the market in the first week of May. Readers will appreciate that some of the predictions like ‘the acquisition of Nuclear Bomb and other arsenal’ and ‘problems related to the health department’ have already come true. The learned reader will appreciate the use of Narayana Dasa as a fine predictive tool in Vedic Astrology. 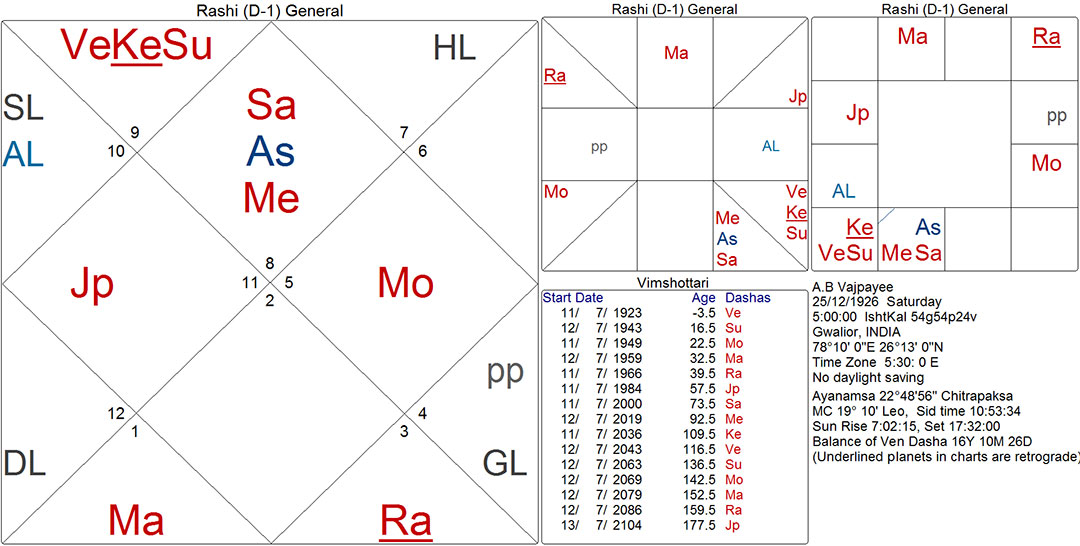 Sri A.B.Vajpayee the Hon’ble Prime Minister of India needs no introduction. However, it is pertinent to note that there are at least three horoscopes in the market allegedly that of the PM. The most authentic data so far has his birth on the Christmas of 1926 (25th December 1926) at 5:03’AM (55 Ghati taking Sunrise at 7:03’AM) at Gwalior. The birth horoscope is at Chart 1. The Lagna and Hora Lagna are conjoined in Scorpio while the Ghatika Lagna is in Leo. Mars aspects the Lagna, Hora Lagna and Ghatika Lagna from Aries by Sign sight (Rasi Dristi) and becomes a perfect Yogada. No doubt that he was destined to become the Prime Minister of India in Mars’s antardasa of Jupiter dasa. It maybe noted that the Moon is placed in Leo in the Ghatika Lagna (Power & Authority) but it does not aspect the Lagna or Hora Lagna. Thus, although he had the largest majority in parliament during Moon antardasa, he was unable to sustain the Rajyoga and the first stint as Prime Minister lasted only for 13 days. The Moon and the Ghatika Lagna are also placed in the 12th house from the Arudha Lagna (Virgo). This shows that the native would not hesitate to renounce power and makes the person saintly. He has recently announced that he would not stand for elections again! How many sitting Prime Ministers will have the moral fiber to renounce politics for the future? This is a far-reaching ethical decision for a healthy democracy. 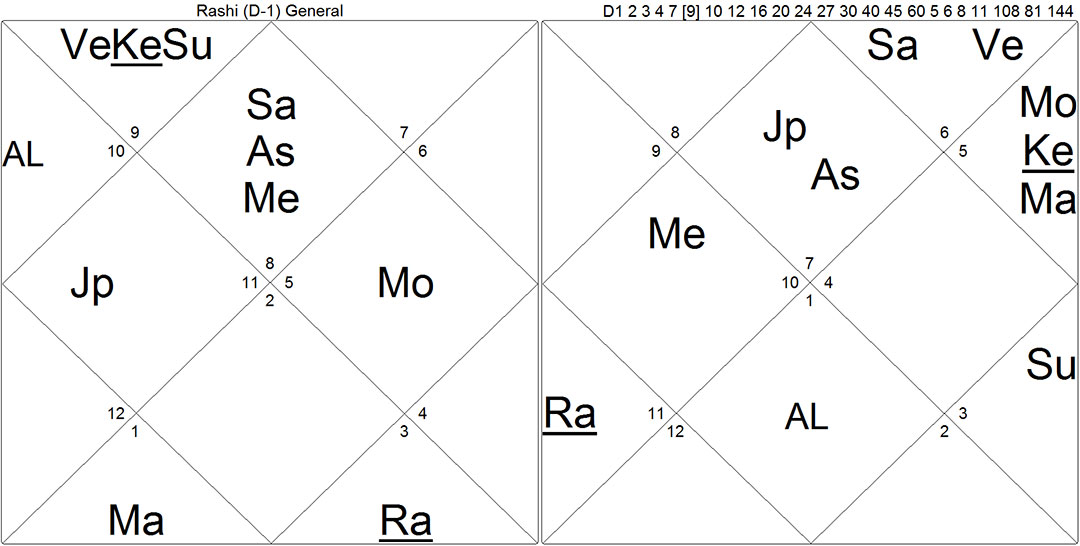 While most critics will view the presence of the eighth lord Mercury in the ascendant as very negative; it is pertinent to point out that as the Chara Atmakaraka Mercury promises high ideals and a very high position if placed in the ascendant. The mutual aspect between the Chara Pitru Karaka Mars and the Chara Atma Karaka Mercury has resulted in a powerful Rajyoga. This gives extraordinary oratorical abilities and skills to debate on any topic (Mercury) besides giving daring and executive abilities (Mars).

Jupiter in the Navamsa Lagna makes the native a veritable genius having knowledge in many disciplines while Rahu in the fifth gives the knowledge of machines or foreign affairs. The latter is quite true, as Sri Vajpayee has been a part of the parliamentary committee foreign affairs for quite some time now. Even in the present Government, he has retained the foreign affairs portfolio for the present. The Moon is vargottama in the eleventh house in Leo showing that the transit of Saturn in Pisces (Kantaka Sani) between February 1996 to April 1998 will be a very frustrating and challenging period. Saturn would place umpteen thorns in the path to the Prime Minister-ship, but thanks to the antardasa lord, Mars these were be overcome in the last minute. 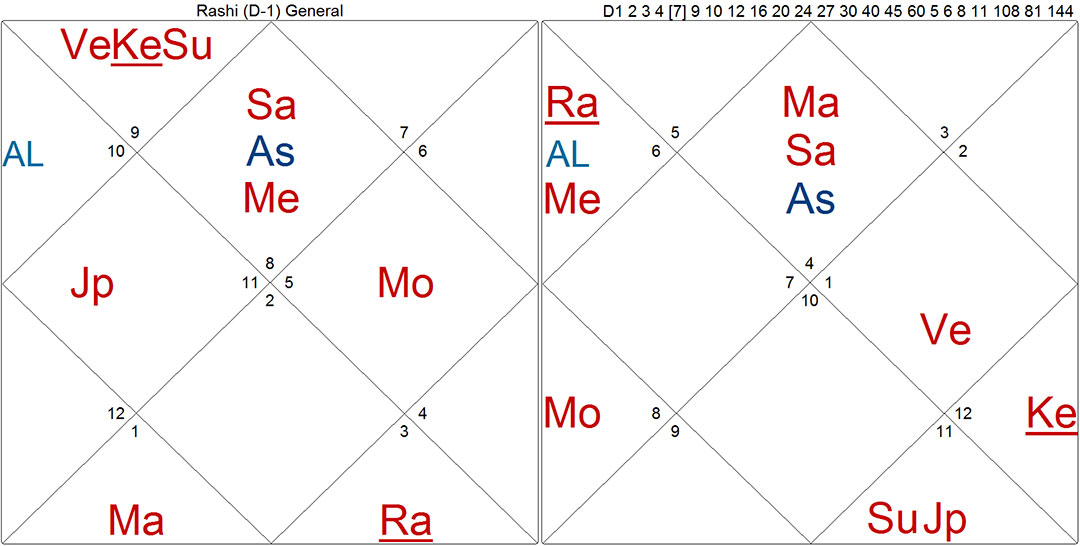 The Saptamsa (Chart 2, D-7) has the eighth lord Saturn in the ascendant while there is an exchange between the lords of the ascendant and the fifth houses with both in debility. No doubt that he is has remained a bachelor and has dedicated his life for the nation. The fifth lord with Saturn shows the likelihood of having an adopted child (a daughter who will bevery fortunate for him) Dattaputra yoga. 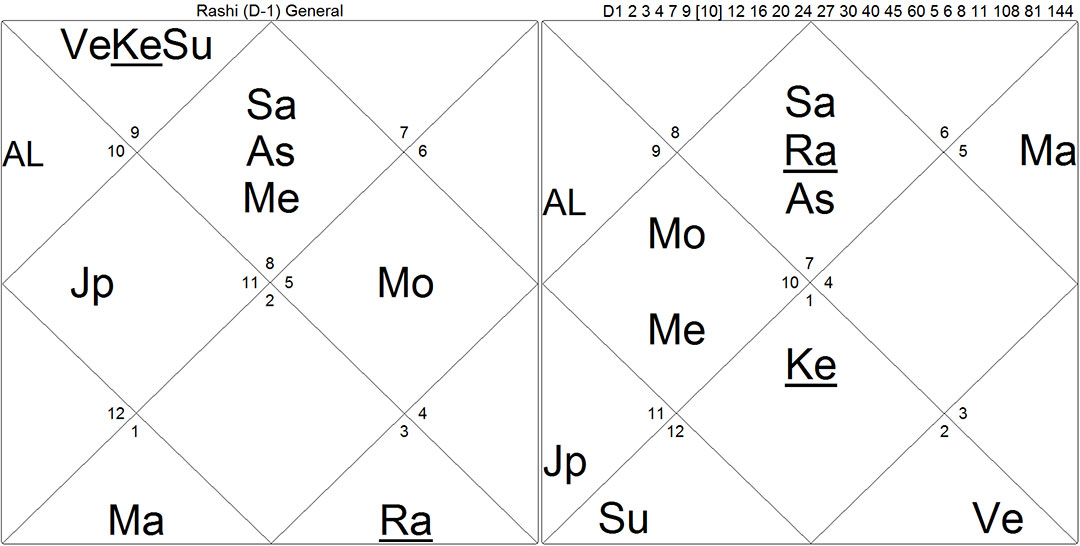 The Dasamsa (Chart 3, D-10) is examined for power and position. Scorpio rises in the Dasamsa with the ascendant lord Mars in the tenth house in Leo. Venus is also in a quadrant in its own sign in Taurus in the seventh house while Jupiter, the lord of the second and fifth house showing authority is also in a quadrant in the fourth house. During the dasa of Jupiter,
Sri Vajpayee has been in Parliament and the helm of politics. He became the Prime Minister on a Thursday during Jupiter dasa, Mars Antardasa and Venus Pratyantar dasa. Although Saturn is exalted, its placement in the 12th house is very good for renunciation and not for Rajyoga. Sri Vajpayeeji has taken an excellent decision to retire from politics after the present stint as Prime Minister.

It’s Politics Again and Sri Vajpayee is back in the saddle!!

Atal Behari Vajpayee-ji’s recent trip to the US and address to a joint session of the Congress was barely covered by the Indian press showing their lack of clarity in the importance of the event. This is the greatest achievement that any leader could have done for India in the past century or so. From playing second fiddle to a host of super powers, India has emerged as the center of activity and is clearly emerging as the leader of Asia. The rise of satya Sanatana is imminent and nothing can stop this great movement.
What is more, immediately on his return he was faced with an impossible scenario in Indian politics and has again succeeded in reviving the sagging image of the BJP in Uttar Pradesh by infusing fresh blood in the form of Sri Rajnath Singh, a sure shot victor. BJP will have a major return and shall shock all the political pundits and calculations when after the elections in UP next year, they shall again form the government. . The formation of Uttarakhand and other new states and the amendment to the Indian constitution for the same has been exactly as predicted.
Readers will recall that in an earlier article on the swearing in chart of Sri Vajpayee, I had expressed serious apprehensions about his health around the months of October-December 2000. The worst is over and the nation breathed a sigh of relief when Vajpayee-ji returned to delhi after a successful operation of the knee. (Saturn was the culprit and rules the legs). Thus it is evident that the remaining part of the readings about India entering its golden phase is sure to come true and all the expressions about a slowing down economy are unfound as the words of Sri Achyuta Dasa shall surely come to pass. The golden eagle shall fly again…
An analysis of the Varsha Pravesh chart of India for 2001 can be read very soon.. I take this opportuanity to repeat my predictions about the BJP.

The next dasa of Pisces (1997 – 2002) is of a Jupiterian sign. Pisces is symbolised by the Lotus and the BJP having the lotus for its symbol again became the largest party in the 1998 general elections. The tenth house from Pisces is aspected by Mars and Shri A.B. Vajpayee (born in Scorpio ascendant and Scorpio Dasamsa became the Prime Minister). The tenth house from Pisces is Sagittarius (Dharma) and a moral code shall be established during this phase.  People will become more God fearing and shall extol the traditional values and culture of India. The liberal policies initiated during Capricorn dasa when Jupiter was in the tenth house shall begin to give fruits, as Pisces is the eleventh house of the Chart. A number of temples, churches etc. shall be built and there will be communal harmony, as the dominating influence of Jupiter shall bring peace to the land. Rahu in the third from the dasa sign shows that the nation will acquire powerful weapons like the Nuclear Bomb and other arsenal for its armed forces. The luminaries (Sun and Moon) in the fifth house promise illumination to the youth and the education system will undergo a dramatic change where learning will be valued and national literacy would be enhanced in leaps and bounds. Jupiter in the eighth house is very good for the finances and the nation will gradually move towards freedom from debt. However, Saturn in the fifth house threatens some health problems and extra effort would be required to curb AIDS hepatitis etc. Mars in the fourth house (Home) is yet another evil placement and the extra efforts would be necessary. The planetary placement indicates the portfolio of the Ministers. The Prime Minister is seen in the tenth house. This is vacant and aspected strongly by Mars (Sri Vajpayee) is the PM. The fourth house (Home Affairs) has Mars in it and Sri L.K.Advani born in Scorpio ascendant is the Home Minister. The powerful Kali Yoga of Saturn and the Moon dominate the fifth house of education, culture and youth. Sri Murli Manohar Joshi born in the intellectual Aquarius ascendant is the Minister for Human Resources Development. Since this dasa is for five years, in spite of all odds, the lotus (BJP) will bloom for this period. The aspect of Mars on the tenth house and its placement in the Badhak sign from the tenth house could be bad for the health of top politicians/leaders.
In the Ayur Khand (Cancer to Libra), Cancer and Libra are aspected by Jupiter and are unlikely to cause the end. Virgo is aspected by the Atmakaraka and is also unlikely to cause death. Leo with Rahu in it is the most likely sign and the longevity of the Government is expected till the tenth Shoola dasa (45 to 50 months or 19 December 2001 to 19 May 2002).