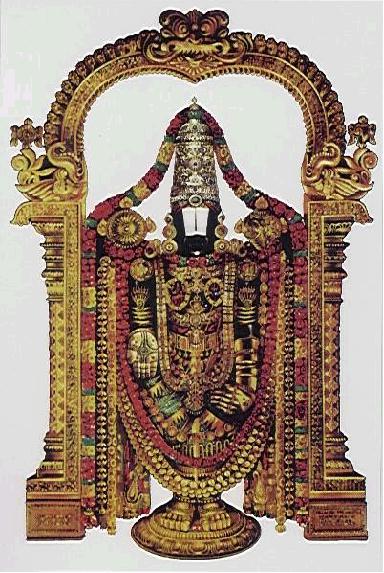 The temple is situated on Venkatadri(also known as Venkatachala or Venkata Hill) the seventh peak in the seven hills of Tirumala, and hence is also known as the Temple of Seven Hills (Saptagiri सप्तगिरी in Sanskrit). The presiding deity of the temple, Lord Venkateswara, is also known by other names – Balaji, Vishnu, Govinda and Srinivasa. The temple is reportedly the richest (discussions exist about the Padmanabhaswamy Temple in Kerala) and the most visited place of worship in the world, having overtaken Koneswaram temple in Trincomalee following its 17th century loot and destruction. The temple is visited by about 50,000 to 100,000 pilgrims daily (3 to 4 crore people annually on an average), while on special occasions and festivals, like the annual Brahmotsavam, the number of pilgrims shoots up to 500,000, making it the most visited holy place in the world.
According to legend, the temple has a murti (deity) of Lord Venkateswara, which it is believed shall remain here for the entire duration of the present Kali Yuga. In South Indian Alwar/Nayanar Sri Vaishnava tradition the temple is considered one of the 108 Divya Desams.
This place was well known as Venkatachala for centuries. This name, it is believed, was given by Lord Brahma Himself. This hill was in the Dwarparayuga known by the name of Sheshachala or Sheshadri. The significance of this hill Venkatachala means “Ven” means SIN and “Kata” means “CUT, DESTROYED OR BURNT”. It means that a person who worships the Lord in this place will get cleansed of all his sins.
ॐ भूर्नमो भगवते व्यण्कटेशाय
om bhūrnamo bhagavate vyaṇkaṭeśāya
Puranic literature which was composed roughly around the post-Mauryan and early-Gupta era also mentions Tirupati as the Aadhi Varaha Kshetra. The Puranas associate the site with Lord Varaha, an incarnation of Lord Vishnu. The Varaha shrine holds great importance in Tirupati and is said to be older than the main sanctum of Venkateswara.
ॐ भूर्नमो भगवते वराहाय
om bhūrnamo bhagavate varāhāya
ॐ भूर्नमो भगवते सूकराय
om bhūrnamo bhagavate sūkarāya
The significance of Tirumala hills is extolled in one of the world’s oldest known sacred texts, the “Rigveda”, and it is described as “Vengadam Hills”[citation needed]. The idol representation is in essence the Godhead’s own manifestation for facilitating worship (hence known as Archavathara). It symbolizes the Supreme Spirit in all its glory and in its immanent as well as transcendental aspects (viz the Brahman of Vedanta). It is in this sense that the self-manifest image of Vishnu (the Vedic God of Gods) on the Vengadam hills (Tirumala) is hailed with the words ‘Venkata-brahmane-namah’.

The person, devoid of wealth and vision, is implored to go to the hill which burns up all evil (vikata for Venkata) and drives away all obstacles to peace and prosperity. The call of the rishi Sirimbitha has obviously not gone in vain.

Leave a Reply to arai75