Bharaṇī nakṣatra extends from 13°20’ – 26°40’ in Aries and has four pada indicating the four ayana of life.

Planetary Relationship with the Sun in Bharaṇī nakṣatra:

Pada-1
If the Sun is in the first pada the person is highly educated, full of good thoughts and wise. He has interest and capability for understanding human mind with the knowledge of psychology and astrology. He is fortunate with abundant prosperity and enjoys an excellent reputation. He has an attractive personality and excellent behaviour. If there is a mark, spot or sign caused naturally or by a wound in near his eyes or on face, it is lucky and wards off other evils. He can become a specialist in medicine, law, husbandry etc. He becomes a successful businessman if the Sun is in the 15th degree (14°-15°) and a manufacturer if in the 16th (15°-16°) degree. Businesses associated with “land” like fertilizer, agricultural implements, clothes for workers, flower or fruits harvest and even hotel or buildings.

Pada-2
If the Sun is in the second pada then his upbringing has been positive and happy childhood with a good family that has a good social position. He gets great pleasure from his children and his wife. He gets unexpected wealth which can be sudden inheritance from unexpected relations or sudden business gains through political friendships and such things. He suffers from diseases of throat or private parts. Women can expect uterus problems. He profits from trade and commerce associated with all sorts of goods and water. If the Sun is in the 18th degree (17°-18°) ratija diseases (i.e. diseases from ‘skill in the art of love-making’) afflict him. If the Sun is in the 19th degree (18°-19°) then serious skin diseases are indicated.

Pada-3
If the Sun is in the third pada then the native has to struggle very much in life. Sun indicates rājabhaṇga nīca-yoga i.e. even if a king he loses kingdom and suffers penury. There will be a time when he has enormous wealth, but he all that goes into other hands primarily due to his extravagance and largesse. All planets become negative and none of the mahādaśā or antara give any respite because the primary fall is cause by the Sun, the graha-adhipati (lord of all planets). If he starts worship of the Sun either during its mahādaśā or its antara, then he can regain some of the lost wealth and position just as Savitṛi regained her husband from Yama. When the Sun has fallen (nīca-navāṁśa), of all the graha Mars becomes the most malefic. Accidents causing breakage of skull and such adverse situations can occur during the daśā of Mars in addition to business losses and debts. Income reduces to a bare trickle. A strong and positive Mars can aggravate the fall of the Sun ushering in good profit and income and increasing wealth and prosperity. Traits like aggression and impatience will be seen when Mars is very strong.

Pada-4
If the Sun in the fourth pada then the native has considerable suffering in childhood. Either his father has an untimely death or there is separation from father. Unless other planets assist the native, he lives the life of a beggar with no food and shelter. A single positive planet can protect him. If the lagna lord is not strong, his condition deteriorates drastically, yet he does not beg for a living and instead becomes totally dependent on others who are indicated by that one positive protective planet. 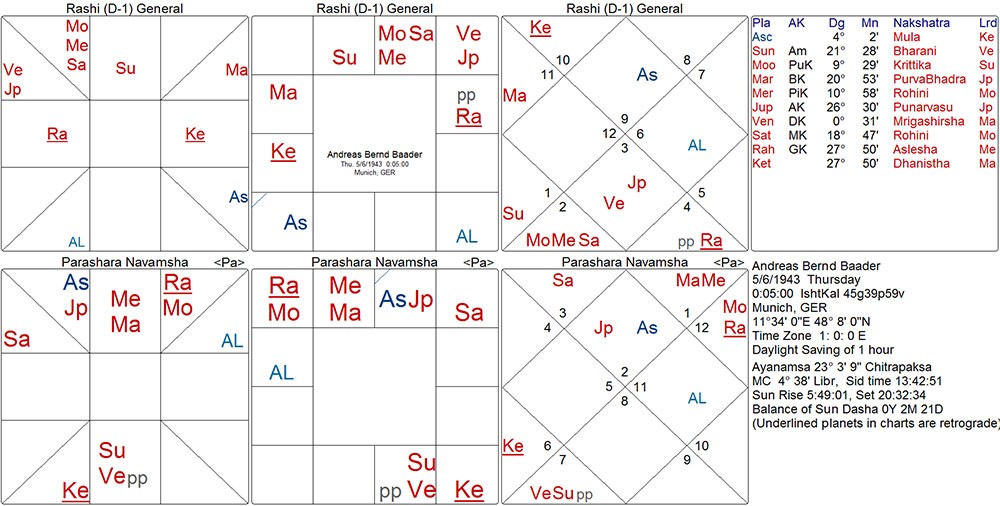 Andreas Baader was born as the only child of historian and archivist Dr. Berndt Phillipp Baader. His father Berndt Baader served in the German Wehrmacht, was captured on the Russian Front in 1945, and never returned. The Bharani problem of ‘missing father’ was activated early when he was barely 2 years old. Andreas was raised by his doting mother, aunt, and grandmother but that would not make up for the strictness required to discipline a boy born with Kala Sarpa Yoga having an exalted Sun in the 5th bhava (very intelligent) but in the 3rd pada of Bharani naksatra. Normally we would have expected this problem for the 4th pada of Bharani, but when we look carefully, we notice that the only planet aspecting the Sun (rasi drsti) is Mars from Aquarius (parakrama).
His first deadly crime was on the night of Apr 2, 1968 when he set fire to two departmental stores causing $2 million damage. Even though convicted in 1968 with his girlfriend, they made a grand escape and toured many countries. Lagnesa Jupiter in the 7th house shows great instability and one who will travel all around. This can be meaningful if the lagnesa is strong, but with Kala Sarpa Rahu dominating the chart and with Jupiter in zero-digbala, it is obvious which direction this chart is moving in – CRIME. To add to the woes, there is a graha-malika yoga cought up inside the Kala Sarpa Yoga and a bad one at that starting from the Sun in rajabhanga nica yoga of Bharani 3rd pada to Rahu in Cancer. Now add Sun and Rahu together as the start and end of the yoga and we see a great fire that threatens to destroy so much.
More infor can be had from Wikipedia or this wonderful History Channel recommended Website. These very planets Sun and Rahu aspect AL3 creating dushta-marana yoga and ensure that he too shall die by the bullet (Sun) in prison (Scorpio is 12H showing prisons). Of course he did not commit suicide as the proceedings would like us to believe – the cops had their revenge and knew that if he got out again because of some legal loophole, there would be no stopping this human-anaconda.

10 thoughts on “Sun in Bharaṇī” 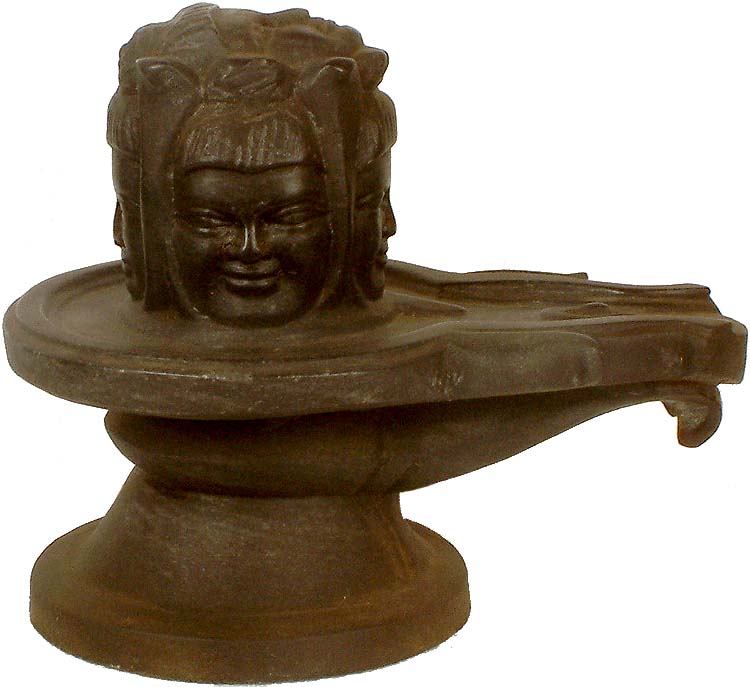