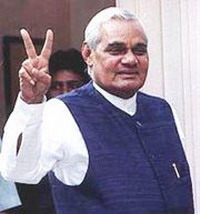 Authors Epilogue:  (PUBLISHED MAY 1998)
Readers will see my optimism in the lines below and I had expected that the Vajpayee Government would cross the first two dangers  and would stay till 2002. However, my optimism was proved incorrect and the Government fell in the most dangerous period (19 Jan 1999 to 19 June 1999). This dangerous period had been fore-warned and in spite of good advise, the ill fated event happened. The Narayana dasa are also indicated below and it happened in the Narayana Dasa of Rahu in Leo. Unfortunately, my warning could not stop Rahu.
Readers will see the accuracy with which the other events had been predicted using NARAYANA DASA like: 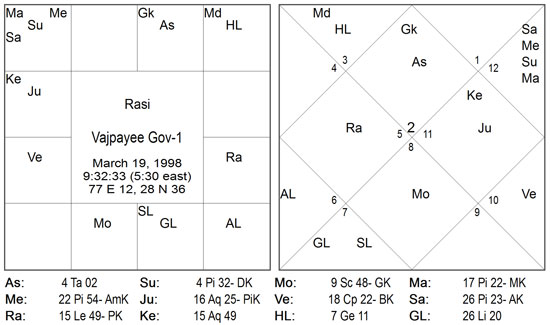 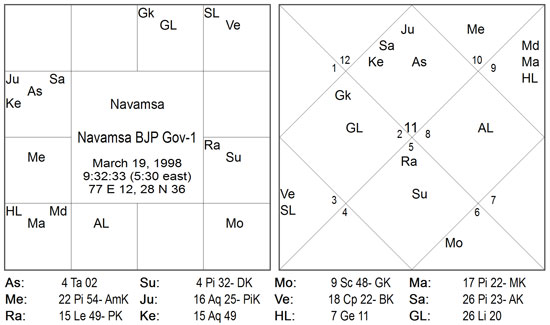 The Vajpayee Government was sworn in on Thursday March 19, 1998 at 9:32’: 33’’ AM IST at New Delhi . The Muhurat for the swearing in seems to have been chosen very well, as it is a quadrant from both the Lagna and Dasamsa Lagna. In fact, it is the same sign as occupied by the seventh lord Venus in the Dasamsa Chart and the Pratyantar dasa of Sri Vajpayee was that of Venus at that time.

The ascendant lord in the ninth house shows that the Government will be establishing Dharma (ethical methods of working). Let us examine the longevity of the Chart as per canons on this subject.

Thus, the two sutras indicating long life shall dominate. Further, if the Moon is in the first or the seventh house, the longevity shall be determined by the Moon & Saturn pair to show long life. The Atmakaraka is Saturn and it is not placed in the 1st, 3rd, 7th or 9th house and Vipareeta Ayur yoga is not applicable to the chart. The Maximum longevity of the Lok Sabha is 5 years and each Shoola Dasa shall be for a period of 5 months. The Shoola dasa will begin from Scorpio in the seventh house, as it is stronger than the ascendant. The Purna Ayur Khand is from the ninth Shoola dasa of Cancer to the twelfth Shoola Dasa of Libra (i.e. 40 months to 60 Months longevity). Based on the above, we may predict the following: –

The antardasa of Rahu in the dasa of Jupiter in the natal chart of Sri Vajpayee is between 25 June 1998 to 18 November 2000. Rahu in the eighth house from the ascendant and the Atmakaraka are not a good placement as it generates a dustamarana yoga. Rahu is also in exaltation but is very well placed in trines to Jupiter in the fifth house in the Navamsa chart in its own sign. Secondly, this exalted Rahu is in the tenth house from the Arudha Lagna. This will indicate success in all works especially international affairs and will give pilgrimages, divine deeds etc. Rahu placed in the twelfth house in the Dasamsa shows secret enemies who will plot against him and also shows the Hon’ble PM as a God fearing and trusting soul. Thus, while difficulties are indicated, so is success indicated. The security of the PM should be strengthened and he should beware against the plotters. Regular recitation of the Maha Mrutyunjaya Japa is the best remedy.

Since the Purna Ayus of the Chart is for 5 years, the Narayana dasa period equivalent for each sign gained by a planet is 15 days instead of 1 year. Thus, the Narayana Dasa of the Swearing-in chart is as follows: – 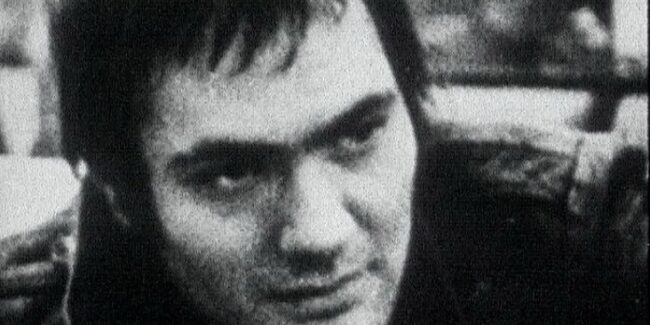 Sun in Bharaṇī
Bharaṇī nakṣatra extends from 13°20’ – 26°40’ in Aries and has four pada indicating the four ayana of life. No....
Shiv Sena Party
Article examining the formation chart of the Shiv Sena Political Party.[Published 1998] The party is very strong in Maharashtra and...