Sri Karunanidhi, better known as Dr.Kalaignar was born on Tuesday, the 3rd June 1924, in a small village Thirukuvalai in Thanjavur District of Tamil Nadu (Long:79E09’ Lat: 10N48’) at 12:20’ LMT (12:33’ IST).
Rasi Chart has Leo rising with Rahu in it giving a Yoga for Princely Rajyoga. The Sun, as lord of Lagna is in the tenth house making for a Karma Yogi and one dedicated to positive action. This gives clear thinking and determination as well as the blessings of Ganapati which bring Vidya (Knowledge) and Siddhi (Success) in all undertakings. The conjunction of the exalted Moon with the Sun indicates an exalted mind with a lot of idealism (exalted) and socialism (Moon). His famous statement “See God in the smile of the poor” and his multi-pronged and extremely effective social intervention for poverty alleviation won the heart of the then President of India Dr. V.V. Giri, who commended his social schemes with the view “Tamilnadu leads the rest of India”. Thus the very objective of the Lagna forming a powerful Yoga for undying fame (tenth house placement of the planets) was achieved during his first tenure as the Chief Minister of Tamil Nadu. Such people are very committed to a cause due to their high idealism and are prepared to pay any price to achieve their dreams. They are true to their words and will not break a pledge or promise under any circumstance.

His multi-dimensional talents as a writer, novelist, dramatist are seen from the placement of both the luminaries Sun (also Lagna Lord) & Moon in Taurus ruled by Venus, the planet for fine arts. Venus as the tenth lord of Karma (Profession) is placed in the 11th house of income showing that the Karma-kshetra (place of Karma) and income shall be a Venusian area. His own action in this shall not be acting, but instead writing as Venus is placed in Gemini ruled by Mercury the planet of letters. Rahu is in a Star of Venus (Poorva-phalguni) and shall give its results. Thus during the Rahu Dasa he was a big success in the movies and his dialogues and scripts as well as his novels brought a large fan following and respect from the intelligensia as well.

In the Dasamsa (D-10 Chart), we find Mercury in the tenth house aspected by Mars showing a very fiery writing style. As such Mercury in the tenth shows a man of letters and clearly shows his outstanding literary skills that showed up in movies, novels and other writing as a journalist.  Mercury is also placed in the Lagna in the Navamsa chart showing natural speaking abilities and oratorical skills. This makes him flexible when necessary and extremely witty and intelligent to the point of outsmarting and outmaneuvering the opponent.

However, the Sun in the tenth house aided by an exalted Yogakaraka Mars in trines to it makes him an unparalleled organizer, administrator, political thinker and astute statesman. He is very unassuming and easily accessible person due to the Ketu in Navamsa Lagna in its own sign Scorpio showing one who shall be very humble and shall not forget his origin. He shall have a lot of humanitarian feelings and shall care for the poor and downtrodden. Saturn in the Navamsa Lagna makes him follow the tradition to the extent it is within his definition of democracy (Saturn) and does not infringe upon the self-respect of the poor.

On February 10, 1969, in Saturn Dasa Mercury antardasa Dr. Kalaignar took oath as Chief Minister of Tamil Nadu. Saturn is the malefic Lord of the 6th and seventh house and is placed in exaltation in the third house. This placement of Saturn in a Dusthana results in Rajyoga and the Dasa of Saturn made him the chief Minister many times. Being retrograde Saturn will give results akin to debility implying “Rajabhanga Neechayoga” for the sixth house of enemies. Thus, his enemies will be big people like leaders of state or other big people and Saturn shall help him to pull them down. True to his words, he worked hard for the welfare of the poor and the revival of Tamil cultural heritage. Lok Nayak Jayaprakash Narayanan lauded his poverty alleviation schemes. Dr. Kalaignar constructed monuments like Poompuhar Art Gallery, Valluvar Kottam, Kattabomman fortress etc.

Autonomy for the states and federalism at the center

Saturn the great lord that gives power to the people or implements federalism had its marked say during its dasa from 1963 to 1982. Further, it is well known that planets associated with the Ghatika Lagna shall lead a person to power. In this chart, the Ghatika Lagna is in Libra associated with exalted Saturn. Thus, this cause of freedom whether personal or to the states i.e. devolution of powers was what led to the rise of Karunanidhi. He was the first Chief Minister since independence who constituted a committee viz Rajamannar Committee (1969) during Saturn dasa Ketu Antardasa, to study the Center – state relations and submit an official report on state autonomy. Formation of such committees or bodies of higher learning and study related to the work front are seen in the ninth house in the Dasamsa chart. In the D-10 chart, Saturn is in the ninth house and Ketu, the lord of the ninth house is in Lagna (ideals/principles of governance). Thus, Saturn and Ketu favor the formation of such an important committee.

In April 1974, at the end of Saturn dasa Sun antardasa, Dr. Kalaignar introduced an epoch-making resolution in Tamil Nadu Assembly, advocating more powers for the states based on the recommendations of Rajamannar Committee for the revival of inter-state council etc. The Sun as the lord of Lagna in the tenth house gives Siddha yoga and being in the fifth house (legislation/teaching/authority) in the Dasamsa (work), it paves the path for legal/ authoritative implementation of the policy.

The privilege of state Chief Ministers to unfurl the national flag in their state capital on Independence days (since Aug. 15, 1974) which no Congress Chief Minister dared to raise is a notable achievement of Dr, Kalaignar and a march towards State Autonomy and the higher ideals of democratic state. This happened during Saturn Dasa Moon Antardasa. Moon is exalted in the tenth with the sun showing the public acceptance or implementation of the policy initiated during the Suns period. Moon is also the lord of the fifth house in the Dasamsa and is its dispositor. Moon being in the eighth house in Dasamsa chart, this had to take the form of breaking of a servile tradition of the Congress Chief Ministers who, in perpetual awe of their political mentors at Delhi, did not dare to stand up for their basic rights.

Typical of Saturn the worker, Karunanidhi’s desire to strive for them resulted in providing 8.33% Bonus to the workers irrespective of profit or loss. He was also among the first to declare May Day as a paid holiday.

Dr. Kalaignar resigned from the Tamil Nadu Assembly (in 1983) as a mark of protest. He believed in the dictum “We do what we say, and we say what we do.” Later, another DMK Government in Tamil Nadu was dismissed by the Central Government led by Mr. Chandrasekar in 1991 alleging secret links with LTTE. Such injustice for the fighter of federalism. Undeterred, Karunanidhi was like the blazing Sun and continued his campaign unrelentlessly.

Movement against corruption in public offices

In 1969 during Saturn dasa Ketu Antardasa, his government adopted a resolution enjoining all legislator’s, Minister’s and the Chief Minister to file annual property statement in the Assembly. In the Dasamsa (D-10 chart), Saturn is in the ninth house and Ketu is the lord of the ninth house placed in Pisces the sign of purity. This has been one of his driving forces.

Karunanidhi made history (1973 – Saturn Dasa Sun antardasa) when he dismissed the Corporation of Madras ruled by his own party as he found a prima facie charge of corruption against it. Perhaps, he is the only person after Jawaharlal Nehru (who campaigned against one of his own corrupt candidates) to take such a self rectifying stand. The sun is in the fifth house on the dasamsa in Cancer and such people insist on openness or visibility (Sun) in their public lives. Piloted by him, the State Assembly passed (1973) the Tamil Nadu Public men criminal misconduct Bill to enquire into the allegation of corruption against the Chief Minister, other Ministers, MLAs and MLCs present or past. Tamil Nadu is the only State where the Chief Minister is also brought under its purview. It is ironical that MGR who claimed to fight corruption, repealed this very Anti-corruption Act (in 1977)!!

Ketu dasa started with him in power as the Chief Minister of Tamil Nadu. The present period of Ketu dasa Moon Antardasa (May-Dec 2001) is a period of eclipse (Ketu eclipses the Moon) and he has faced the horror of being arrested without proper documents and at an unearthly hour. This shocking event was captured by the TV press and has earned him a lot of sympathy. The period after December 2001 is favorable. 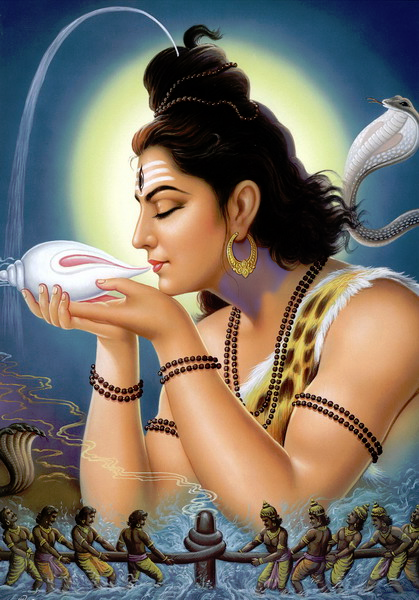 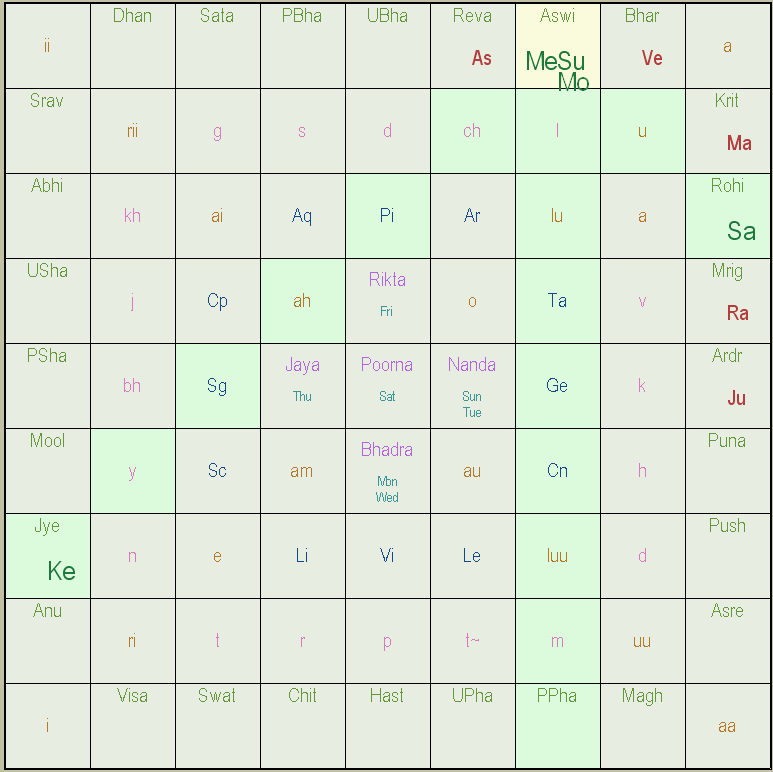