Note: The authenticity of this story is doubted but there is no doubt that Khanna or Lilavati was a great astrologer. We intend to present her great teachings in the recent future by translating some of her works. A television serial in the bengali language highlights her achievements.

Kalidas, Varāhamihira, Ghata Karpura, Dhanvantari, Vararuchi, Vetāla Bhatt, Kṣayapanaka, Śaṅku and Amar Singh  – these were the Navaratna (nine gems) in the court of Vikramaditya, the Maharaja of Ujjain. Among these experts Varāhamihira was the best in jyotiṣa (although one text is also attributed to Kalidas). His calculations and prediction were simply astounding.

Varāhamihira was blessed with a son and prepared his horoscope. The great astrologer made a significant blunder in the calculation of longevity of his son – instead of a hundred years, he calculated this as ten years! Lamenting his misfortune he felt that he could not take the sorrow of death of his son in the tenth year and placing his child in a basket, set it afloat in the river. It is noteworthy that several years back during the time of Kṛṣṇa, Kunti had done the same for her eldest son Karna who was the son of Sūrya, the Sun god, and Varāhamihira was considered an incarnation of the Sun god. He belonged to a family of Sun worsshippers.

The Story of Khanna

This is the story of Lilavati lovingly called ‘khanna’ the mute or stammerer. Read on as to why and how she lost her speech.
Around the same time, Lilāvatī, the baby princess of an Island state was kidnapped and adopted by Asura after they killed her parents and destroyed the Island city. The asura were enamoured by her beauty, sweetness and innocence. She was adopted by the asura, from whom she learnt jyotiśa and other subjects. Varāhamihira’s handsome baby was also found by the same Asura and they adopted the boy. In due course of time they grew up and married. Lilāvatī went on to become the best jyotiśa among the Asura. The couple were not happy in the bondage of the asura although the asura king had a fondness for them. Choosing Mahendra Muhurta, they decided to escape from the city/bondage. The guards rushed to the king and informed him about the escape of Lilāvatī and Kumar Mihira.
The king wondered, “This escape or departure was started at Mahendra Muhurta and the end results must be beneficial/good. Hence it is futile to block the escape.” Instead he ordered the guards to help the couple cross the seas to mainland India and carry with them copies of three books namely, (1) Ākāśa tatva (2) Pŗthvi Tatva and (3) Pātala tatva. These books were to be handed over to Kumar Mihira and a tough question (praśna) was to be put to him. If the reply was wrong then the third Book (Pātala Tatva) was to be brought back.
On landing in India the Asura looked at a pregnant cow that was about to deliver and asked, “What is the colour of the calf to be born?” Kumar Mihira did some astrological calculations and replied, “White of course.” The cow delivered a pinkish coloured calf. Stating that the reply was wrong, the Asura walked away with the third book (Pātala Tatva). Kumar Mihira was beset himself with rage and felt that all his learning had been a waste. He seized the remaining two books, tore and threw them into the sea. When he looked at the calf again, the cow had licked it clean and it was indeed white in color! Kumar realized that the jyotiśa knowledge in the books was true and rushed backed to the sea. Unfortunately, he was able to recover a small portion only. [Perhaps this is called Rāvańa Saàhita today].
Kumar Mihira made his way to Ujjain along with Lilāvatī and met his father. The great Varāhamihira was overwhelmed to realise his calculation error and thanking the Sun God, welcomed his son and daughter-in-law back.
Just as dark clouds cannot hide the brilliance of the full moon, talents/abilities do not remain hidden. Gradually the king Vikramāditya, the courtiers and the public became aware of the brilliance of Lilāvatī and invited her to participate at the royal assembly. Varāhamihira grew jealous and humbled and his importance seemed to dwindle as the glory and popularity of his daughter-in-law Lilāvatī started increasing. He could not take it anymore and called his son Mihira and asked him to cut a hole in the tongue of Lilāvatī else their own value, importance and status will be affected.

Kumar Mihira was in a fix. As per the śāstra ‘ājnā guruńāmavicārańāya’ he was compelled to obey the direction of his father and chief astrologer (guru) of Ujjain. He grasped a knife and approached Lilāvatī. Realising his intentions, Lilāvatī said, “O! My lord! My husband! Why delay? Just go ahead and obey your father. However before doing that please record some important teachings (concerning jyotiśa)”. Thereafter Lilāvatī recited various stanza concerning jyotiśa and agriculture, rainfall, travel, horoscopy etc. After recording her teachings Kumar Mihira cut her tongue. Having lost her speech due to this heinous act, Lilāvatī started stuttering. However, she continued to communicate with gestures and writings. Out of affection, people started calling her Khanna (the stutterer/mute) and were convinced that her ‘vac’ (profound predictions) would never fail. Her teachings are called Khanna vacana and are very popular in Bengal and Orissa. It is noteworthy that the great Parāsara was made lame by the Hayas and people used to refer to him as Pańgu muni (lame sage). I guess people are the same everywhere and at all times.
Seeing the suffering and hearing about her character, Varāhamihira realized his sin and his writings in Bŗhat Samhita reveal great respect for women and equality of the sexes. He has gone a step further to admit that women are really the ‘better half’ of human society. After all, look at the planets that represent women – all natural benefics like Moon, Venus, mokśa karaka Ketu while the maximum negative is Saturn the eunuch. Now look at the planets signifying men – short-tempered Mars, egoistic Sun, Rāhu the terrible while the only great benefic is Jupiter. Thus, the percentage of good men is miniscule (Jupiter) as compared to women.
This episode reveals the extent of suppression that women suffered. Let this be a constant reminder to all men that real growth of knowledge and understanding of jyotiśa can occur if we give an equal opportunity to women to study and contribute. After all, every astrologer worth his salt knows that knowledge is incomplete without the blessing of Sarasvatī.

Asura: Lit.demons who did not follow the ŗta or code of the arya’s (Sun/agni worshippers).

Yama Calculations
Accurate Yama calculation The accurate method will use the sunrise time of the next day to calculate the duration of...
Vimśāṁśa Workshop 2011
The Spiritual weekend workshop in California was a great success and the expert vedic astrologers of America enjoyed every minute.... 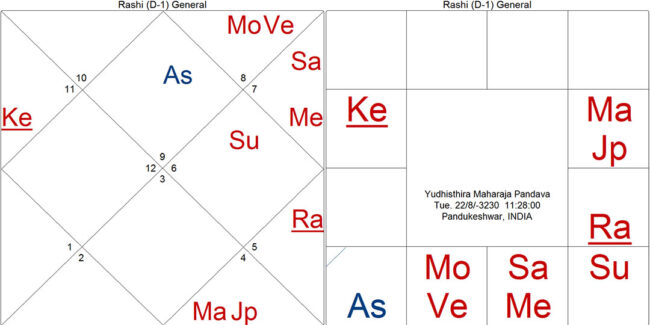