Chief Justice William H. Rehnquist is born in Scorpio lagna with Jupiter the planet ruling the judiciary almost conjunct the lagna degree. Jupiter is also the lord of the āruḍha lagna showing that there shall not be any difference between what he preaches (image – the āruḍha) and what he is (lagna) and that he shall be a strong upholder of what he believes to be true (Jupiter).

The parivartana yoga between the Sun (work – tenth lord) and Mercury (gains, income – eleventh lord) causes him to be above greed and very honest. Three benefic planets in quadrant houses forming parvata yoga give him an excellent reputation, good fortune, eloquence and fame and Jupiter in lagna in such strength promises undying fame due to his knowledge and protects him from many evils. Jupiter forms sunaphā yoga (2nd house from Moon) and mukuṭa (crown) yoga (breaking sakaṭa yoga by the placement of Jupiter in quadrant). The exalted Saturn conjoins the Moon to show that his mind (Moon) can be orthodox and believing in age old established values and customs. Moon is the amātyakāraka and the sani-candra yoga influences his work and career and makes him more Republican oriented. The natural benefic planets Mercury and Venus in the 6th house produce spirituality and the native is not overtaken by either greed (Mercury) or sexual desires (Venus). However, the aspect of Mars on Mercury decided his career to be in the legal field and Jupiter in such strength makes him a judge.

After serving with the Army Air Corps in World War II, Rehnquist went to Stanford University and graduated in 1948 (Saturn daśā Moon antardaśā) with both graduate and master’s degree. In the siddh?m?a (D24) chart, Moon is the lord of the ninth house (graduate) and Saturn aspects Jupiter in Sagittarius in second house (Masters). Mercury and Saturn aspect the second lord Jupiter in the second house promising more masters level degrees. He earned a second master’s degree from Harvard University in 1950 in Saturn daśā Rāhu antardaśā. However, this was not to be his career direction and he enrolled in Stanford University Law School. He graduated from Stanford Law School in 1952 in the same period.
During Saturn daśā Jupiter antardaśā (for the 1952-1953 Term) Rehnquist served as law clerk to Supreme Court Associate Justice Robert H. Jackson. Saturn is the natural significator of service and aspects the sixth house (service). The daśā of Saturn the servant was ending and with no planets in the sixth house in the dasāṁśa it was not possible for him to continue in service. In 1954 he settled in Phoenix, Arizona, and practiced law for sixteen years till 1969. This private practice was right till Mercury daśā Jupiter antardaśā. As the fifth lord aspecting the tenth house Scorpio Mercury gives a good practice in law and the conjunction of the Moon as the sixth lord (disputes) adds to the legal aspect of the work. With the advent of Mercury daśā Saturn antardaśā, he went back to service when President Richard Nixon appointed him Assistant Attorney general for the Office of Legal Counsel in the Department of Justice.
The nodes are debilitated in the dasāṁśa and so is a debilitated Sun in the bādhaka house promising Śrīmanta yoga. The Sun has parivartana yoga with Venus involving the seventh house and ninth houses and promising good fortune. On 21 Oct 1971 in Mercury daśā Saturn antardaśā Rāhu pratyantara daśā, President Nixon nominated Rehnquist as an Associate Justice of the Supreme Court of the United States. Crucial transits on that day include the Gajakesari yoga of Moon and Jupiter in Anurādhā nakṣatra in lagna and ninth from āruḍha lagna; the nodes reverse their natal position i.e. Rāhu transits over natal Ketu and vice-versa which is a good period for annulling the effect of the nodes; Sun transits over rājyapada (A10) in Libra promising high office and position; all planets transit signs having five or more dots in their aṣṭakavarga except for Venus (4 dots) and Saturn (1 dot). However, he had to wait for the Jupiter pratyantara daśā for the Senate to confirm the appointment. This event happened on 10 Dec 1971 when the Sun had come to a trine from āruḍha lagna and the Moon was in the 7th house from AL (normally transit Moon should be in a trine, 7th or 12th house from a sign to activate it positively). Justice Rehnquist continued in this position of Associate Justice for fifteen year.
On 17 Jun 1986 in Venus daśā Rāhu antardaśā, President Ronald Regan nominated him as Chief Justice of the United States and the Senate confirmed the appointment on 17 Sep 1986 in the same period. As Chief Justice he serves as Chairman of the Judicial Conference of the United States and as Chairman of the Federal Judicial Center.

Career and other Predictions

Of course it is much easier to see such vital career changes easily with the Nārāyaṇa daśā. We have already noted that the nodes and the Sun in debility in dasāṁśa promise Śrīmanta yoga. These planets are placed in Cancer (Rāhu), Virgo (Sun) and Capricorn (Ketu) in the rāśi chart. Ghāṭikā lagna (GL) is in Scorpio with Jupiter in it promising the highest position of power in the judiciary and also consequential fame. Scorpio is aspected by Cancer, Aries and Capricorn. With the advent of Cancer Nārāyaṇa daśā in October 1971, Rehnquist was nominated as Associate Justice of the Supreme Court as Cancer has Rahu in it which is debilitated in dasāṁśa and aspects the fifth house. In the same dasa he was confirmed by the senate as the sign is aspected by the ghatika lagna.

Thereafter in Virgo Nārāyaṇa daśā (1985-86) he was nominated as the Chief Justice as Virgo has the Sun in it which is in debilitated dasāṁśa in the ninth house.
However the confirmation of the senate came with the advent of Aries Nārāyaṇa daśā which is aspecting the ghāṭikā lagna in Scorpio. Aries daśā (1986 – 96) saw him serving (6th house) as the Chief Justice.
The next Nārāyaṇa daśā of Scorpio (1996 – 2006) has the ghāṭikā lagna in it and he continues in the topmost position as the Chief justice and all assumptions about his retirement have failed simply because this Nārāyaṇa daśā has not ended. [Prediction was correct as he never retired] What do we see from the 8th lord in the tenth house conjoined Venus, lord of the 3rd house from AL, more so when this combination is aspected by the Moon (Rudra yoga) and Saturn (disease) from Libra? And we know that Saturn is about to enter Cancer which is in trines to the āruḍha lagna. And we also know that the Vimśottari daśā of the bādhakeśa Moon conjoined Saturn has started from April, 2005.
[Prediction was correct as he died in office]

Apply Rath’s Rules for death date/time:
1. Year of death: Saturn transit in trines to the strongest evil based on AL/7th house trines and lords. Saturn was in Cancer in trines to AL (Pisces) as Rāhu afflicted the AL and made it evil.
2. Month of death: Sun trines the Mṛtyupada A8 or its lord: A8 in natal chart is in Libra and loses sting due to Moon and exalted Saturn. Take Aries and look at trines. Leo is the most evil as it has both Venus and Mercury in 10H (office) and he is expected to die in office (i.e. before retirement). The Sun was in Leo at the time of death.
3. Date of death: Fifth lord is Jupiter but the fifth house is aspected by the Sun ruling the 1st, 9th, 16th and 24th vedic dates (tithi’s). He died on pratipada i.e. 1st day of the lunar month.
4. Time of death: Lagna rising will be trines to AL/7th or the sign of the lord. Lagna rising at the moment of death was Pisces which is the AL.
…may his soul rest in peace. 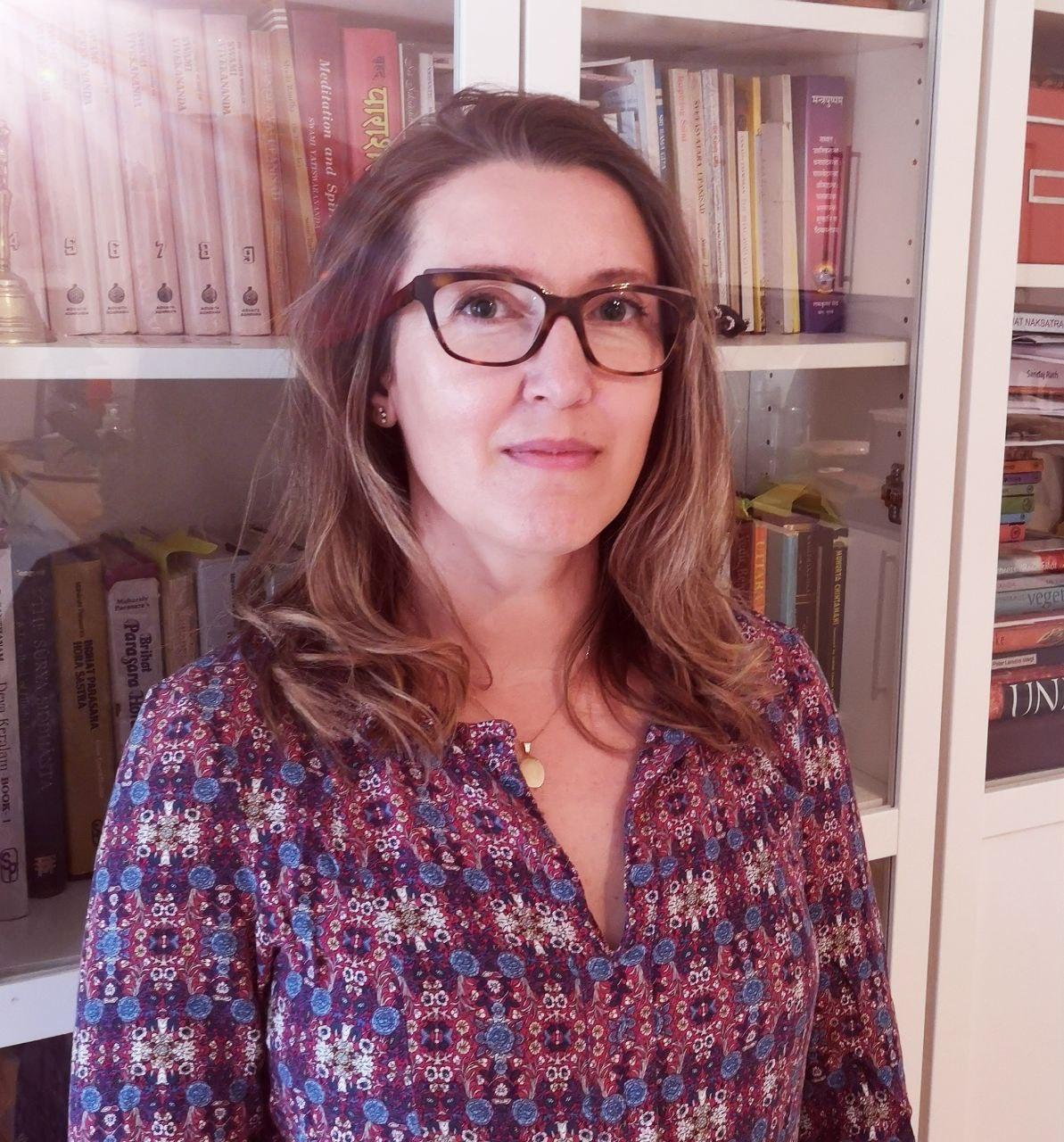 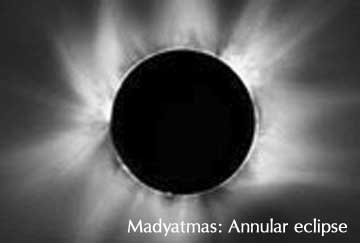 Eclipse Factor
Annular Solar Eclipse of May 31, 2003 Although the Sun is 400 times larger than the Moon, yet it is... 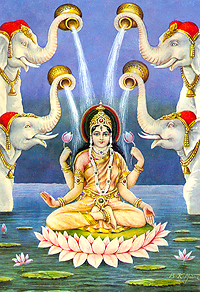