Tithi Pravesha is the Annual Horoscopy of Jyotish. The Tajika System of annual horoscopy employs a chart cast for every year of life based on the solar return (i.e. sun’s return to its natal sidereal position). Many scholars of history and Vedic Studies have held a view that this system is primarily not ‘Vedic Astrology’ and might be a borrowed feature from Yavanas or Tajikas, who interacted with Indian scholars. Notwithstanding the peculiar yoga’s like Iṭṭasāla, Easarpha etc. nor divisional charts like Aṣṭāṁśa  (D-8) etc., which are not a part of Parāśara’s available teachings, outstanding scholars like Nīlakaṇṭha and Dr Raman set a precedent by accepting the Tājaka system as a branch of Vedic astrology.

In fact, not only does it make sense, but the technique of annual horoscopy using the luni-solar calendar is one of the most reliable techniques – and hence a guarded secret – taught by tradition for fine predictions.

Tithi is the Vedic date of the luni-solar calendar and is a measure of the angular displacement of Moon from Sun. It is known that the period between two consecutive full moon’s (i.e. exact 180° displacement of the Moon from the Sun) is about 29.5 civil days. The total movement of 360° of the angle between the Luminaries in transit in a month was divided by 30 to obtain a measure of 12° called ‘Tithi’ (luni-solar day). Tithi is the period in which the angular displacement of Moon from Sun increases by exactly 12°. There are fifteen tithi (15 x 12° =180°) in the waxing phase (śukla pakṣa) and fifteen tithi is the waning phase (kṛṣṇa pakṣa). The displacement angle = Longitude of Moon – longitude of sun. When this angle is divided by 12°, we get an index to the tithi, starting from śukla pratipada.

A child is a product of both parents and the importance of the Moon, even over the Sun in the determination of fortune is a well established aspect of Vedic Astrology. The tripod of life is the ascendant (body), Sun (soul) and Moon (mind). In another sense, these are self (Lagna), Father (Sun) and Mother (Moon). It is but natural that a better definition of the moment of birth would be the angular displacement of the Moon from Sun, instead of just the natal Sun position. This is the Janma Tithi.

We should be equally careful to ensure that such a definition does not dilute the importance of the sun as it is the representative of the real self/the soul. For this purpose Maharshis have defined the twelve sunsigns (or simply signs of the zodiac) called Dwadasa Aditya. These define the boundaries within which the Sun’s placement causes it to have the specific form of a ‘deva’ and a ‘Jyotirlinga’. Thus the longitude of Sun in a sign is not as relevant as its placement in the very sign itself and this fact is taken as an ‘anchor’ for drawing the annual charts. As the soul is the anchor of our existence, Sun’s transit in its natal sign signifies the figurative re-establishment of this anchor, i.e. a new beginning (In fact, it is because of this re-establishment of anchor that marriage is prohibited in the solar month of birth).

Such an anchorage would be meaningless without a consideration of the ‘Mind’ – the emotions, sustenance and fruits of existence. Thus including the Moon’s ‘angular return’ along with the annual solar natal sign anchorage defines the astrological Janma Tithi return.

Though birthday as per the luni-solar calendar is traditionally celebrated when janma tithi returns in the same lunar month (which is identified based on the signs occupied by Sun and Moon at the beginning of the month), this definition was probably adopted for ease in civil usage. The most astrologically acceptable definition is based on janma tithi and sunsign (sunsign at janma tithi return and not sunsign at the beginning of the month). This is the most perfect method for defining the moment that is the closest in emulating the moment of birth. Hence, this is the ‘truest astrological birthday’ or rather ‘birth moment’.

As outlined above, the definition of the annual birth moment is the moment when Sun transits its natal sign and the Moon is at the exact displacement angle from Sun (degrees, minutes & seconds) as at birth.

Pravesha means entry or return and Tithi Pravesha Chakra is the chart drawn for the birth moment of Tithi return every year. If the angle from Sun to Moon matches that in the natal chart, it means that the Tithi running is the same as birth Tithi and also the fraction of Tithi remaining is the same as at birth. If someone was born with Sun in Aries on Chaitra Sukla Navami with 25% of the Tithi remaining, the native’s astrological luni-solar new year will commence every year when Sun is in Aries and Sukla Navami is running with 25% of the Tithi remaining. A chart cast for this moment for the longitude and latitude of the birthplace – irrespective of where the native is currently living – will throw light on the events during the coming year. This chart is called “Tithi Pravesha” (TP) chart. 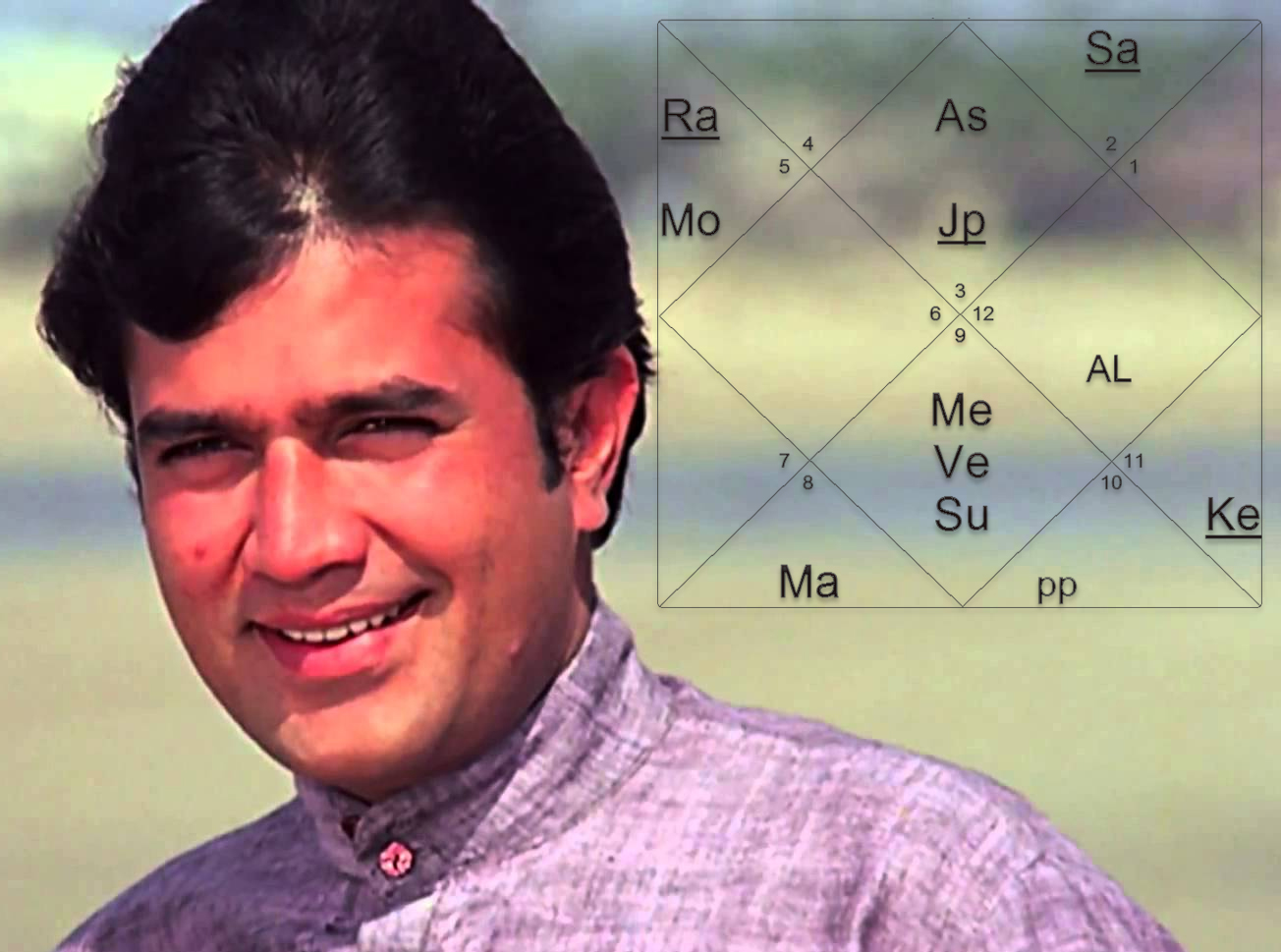 Super-Star Rajesh Khanna
In an era long before this internet age, Rajesh Khanna was the man who sparked a frenzy never seen before...
Tripurā devī
Tripurā devī is associated with Mercury. The seventh bhāva from the signs of Mercury are owned by Jupiter Tripurā devī...
Bṛhat Nakṣatra
Title: Brhat Naksatra Author: Sanjay Rath Publisher: Sagittarius Publications Published: 2008 Cost of the book is US$ 16.95 or Euro...