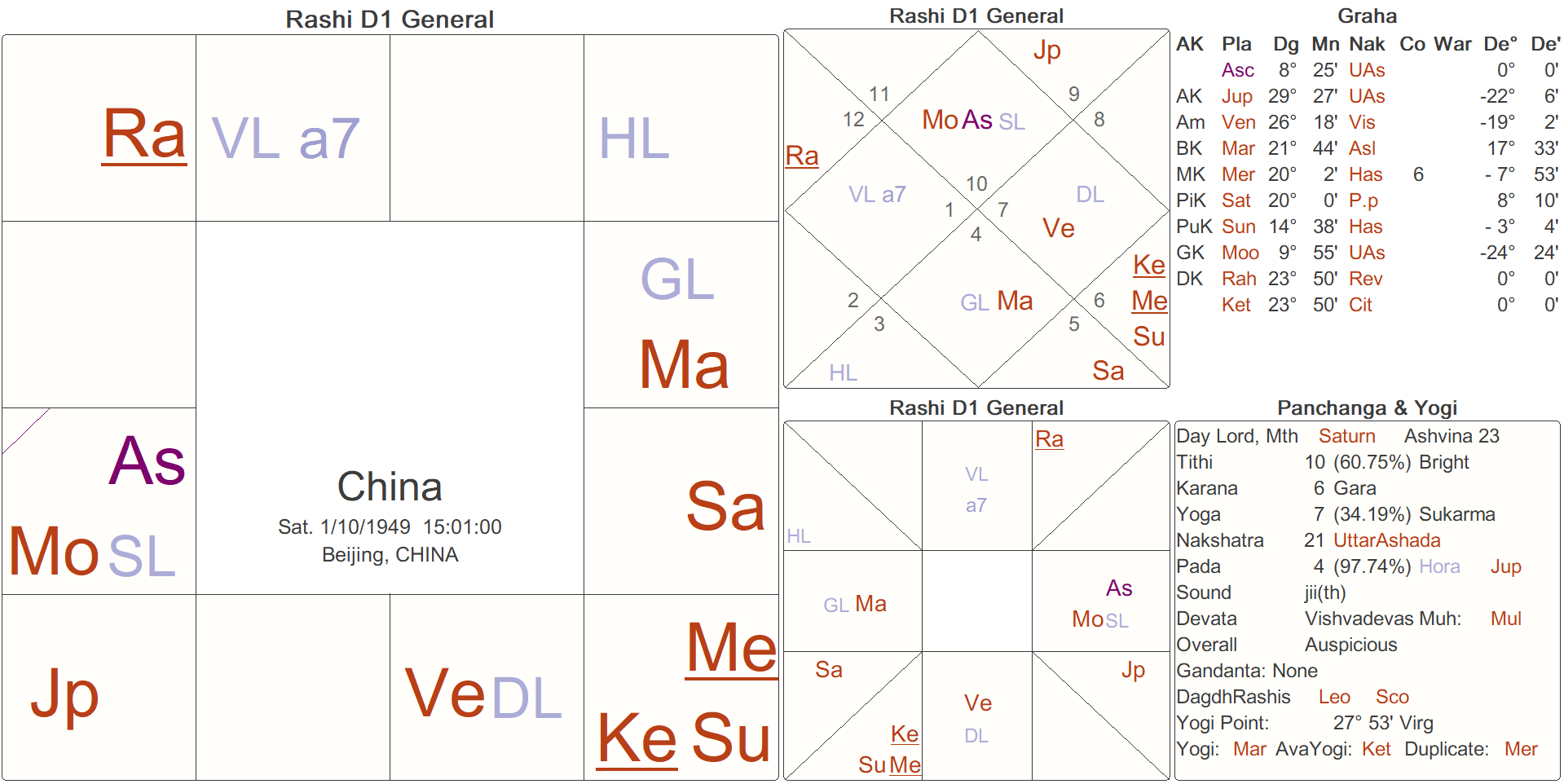 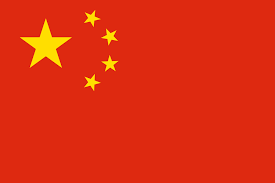 The People’s Republic of China (PRC) was formally proclaimed by Mao Zedong on 1 Oct 1949 at 3:00 pm in Tiananmen Square, Beijing. Chairman Mao chose the new capital although Nanjing had been the capital of the former Republic of China. He brought back the old name Beijing expunging the name Beiping. This is the chart we use for modern China.

Previously we had concluded that “Saturn Daśā of previous Republic chart (1943-52) brings Communism to China” and we see this confirmed in the new “People’s Republic of China” Chart which has Makara Lagna (Sat), Makara Rāśi (Sat śubhapati) and it was a Saturday (Sat) afternoon.

With three daśā working together in this chart, we will have to steer very carefully through the choppy waters of China’s fortunes.

Mao Zedong, having led the Communists (CCP) to victory against the Nationalists (KMT) after two decades of Chinese civil war, founded the People’s Republic of China om 1 Oct 1949.

Moon is in nakṣatra gaṇḍānta indicating radical changes to the structure.

Vimśottari Moon daśā indicates that the general population is gradually adopting to the new system due to the radical changes from the nationalists to the communists. Vimśottari shows the general thinking and the planned way forward. Mao’s three proclaimed tasks were

On 1st May 1950 Moon daśā-antara, Mao personally delivered the new marriage law that gave women freedom of choice. It provided a civil registry for legal marriages, raised the marriageable age to 20 for males and 18 for females, and banned marriage by proxy; both parties had to consent to a marriage.  Marriage had to be based on free choice of partners, monogamy, equal rights for both sexes, and on the protection of the lawful interests of women and children. Simultaneously there was the freedom of divorce, the ban on polygamy and taking concubines, and the ban on child marriages.

Dvisaptati daśā showed what really happened around for men and materials. This was the period of Mercury daśā (1949-58) which is the 6th lord of enemies (KMT was the proclaimed enemy of CCP). Examine Mercury to know about the enemy –

In Dec 1949 (Me-Me-Ju) two million soldiers of KMT followed Chiang Kai-shek into exile to Taiwan and set up a government there. Although initially some moved to Hong Kong, later they went to Taiwan. As the 12th Lord in 12th bhāva, Jupiter will always give an escape route for the enemy thereby sparing their lives. This may infuriate Makara Lagna but then, it does have the graha doṣa of Guru. China does not fear foreign armies, but it does fear monks (Jup) who can easily overcome the communist propaganda.

China entered the Korean war in Oct 1950 (Moon daśā Mars antara). Mars in 7th bhāva as debilitated bādhaka can take Chinese troops to foreign lands and show merciless destruction in war. Yet at times it will also show extreme compassion and kindness, since it is alone.

On 27 July 1953 (Dvisaptati Me-Sa, Vimśottari Mo-Ju) the Korean War ended with an armistice. With the Moon bringing fame and Saturn as lagneśa also aspecting lagna to give fame, China ended up on top securing a strong ally – North Korea. It also established itself as a power to reckon with. The agreement drew a new boundary near the 38th parallel that gave South Korea an extra 1,500 square miles of territory and created a 2-mile-wide “demilitarized zone” that still exists today.

Caturāśīti sama daśā shows the finances and wealth of the nation. The entire period of the Sun Oct 1949 – 61 was going to be very difficult. To study the daśā trend, we divide it into three parts – one each for (a) daśā planet (b) it’s visitors and (c) it’s associations. Benefics generally come first and the worst is kept for the end. But this can vary based on position, yogas etc. The 12-year Sun daśā has the worst phase from 1957-61. It was during this period that Chairman Mao started the campaign ‘The Great Leap Forward’ in 1958. Objective was to transform the agricultural base of China’s society into an industrial one by imposing a commune system that organized peasants and forbade private farming. The plan flopped – necessary yield was not produced and famine followed. This directly led to 56 million deaths, including 3 million by suicide! Although a five-year economic plan, the campaign had to be dropped after two years and fully shut down by 1962. For some reason the Sun is very malefic for communist regimes. See the erstwhile Soviet Union also.

1 thought on “People’s Republic of China” 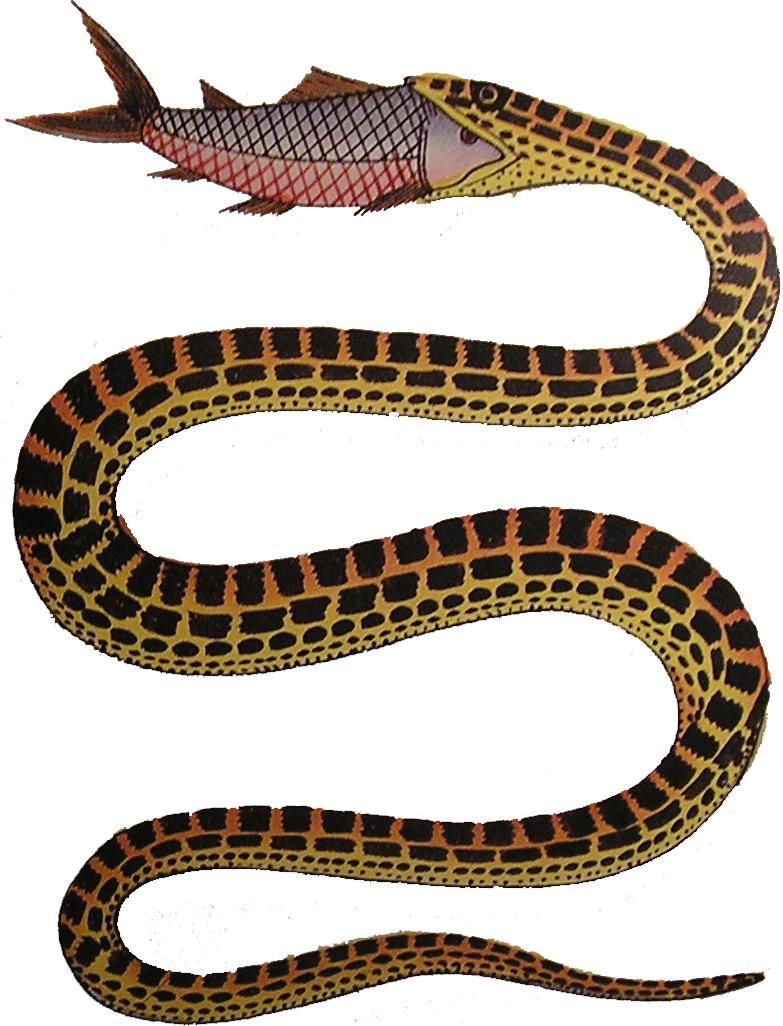 Nagaraja Mantras
Naga means snake and other names are Bhujanga etc. Lord Shiva is worshipped in the form of Nageswara, one of...
Gaṇḍānta
Nakṣatra Gaṇḍānta Gaṇḍa has been clearly defined by Nārada as the period of a prahara (3 hours) covering the junction...