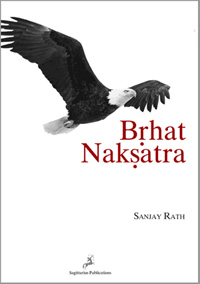 NOT ANOTHER STORY BOOK!

Pick any English book on nakshatra and all you will find is a series of descriptions and elaborations about the 27 lunar mansions and delineation of 27 types of people that make up this world! We would like to credit some recent works, the authors of which have taken the scholarly step of looking beyond these standard descriptions and bringing in a whiff of fresh air with something really wonderful which is also useful.

This book has been named Brihat Nakshatra because we intend to cover everything taught in the tradition about nakshatra (including our research after the passing of jyotisha guru Pt. Kasinath Rath) in it. In this initial volume we have avoided descriptive details about nakshatra as these are already available in other books and will take them up in subsequent volumes. Instead our approach is exactly as is taught in the tradition starting with the sapta-loka mandala and the tri-loka mandala which brings out the first clear difference between the 28 and 27 nakshatra systems under the first part. Thereafter we examine some of the nakshatra groups like Tri-nadi chakra and the nakshatra tattva where you would be amazed to see that the clue to understanding Leonardo’s Vitruvian man lies in the nakshatra tattva. Pushkara nakshatra and Gandanta nakshatra have been explained with the tattva so that the reasons for the dangers posed by them are clearly appreciated. Ample examples using the concepts help to cement them before we go to the well known navtara chakra and show new ways to use it including in relationships and family dynamics. The remedial measures taught are with very specific slokas and those who use vimsottari dasa frequently would do well to get acquainted with this.

Anybody using the Jagannath Hora software would be aware of the special nakshatra in the 28 nakshatra system but few really use them. We show their specific use not only in this chapter but also in subsequent chapters. For example, the placement of the Sun in Manasa nakshatra can cause suppressed anger which can cause schizophrenia. Ample illustrations help to see the utility of these concepts. Thereafter the very basics of nakshatra sight and their use – two systems have been brought out in this book while the others have been left for subsequent books where they are to be used more extensively.

Sula chakra: We did present a paper on this subject sometime back but then we only showed one hand i.e. the transit of the Moon at certain points. The sula chakra is far more important that just that – it is a tool by which we can pinpoint the exact nakshatra the Moon will occupy when a person dies. In this book we cover the details of the sula graha and nakshatra. The reader will realise the power of this trident of Sri Rudra. With this the first part of the book titled ‘Nakshatra Chakra’ ends.

OTHER PARTS
Nakshatra Devata
Nakshatra Devata is not just about prayers and worship as has been made out by most authors till date. Either they do not know what to do about them (most likely) or they won’t share the secrets. The first chapter of this part deals with the Saptarshi nakshatra which is used for timing the world events in the years, decades, centuries and millennium. Yes, jyotisha does have the finest tool to predict and unless we share these tools how will another Parasara be born in this world? With that hope and prayer that the knowledge develop to such an extent that the time would be ready for the incarnation of the seers, we open the nakshatra knowledge of the great Odiya tradition of Parama guru Sri Acyutananda (incarnation of Sri Garuda) who foretold the event of a center stone falling, 300 years after his death, in the Jagannath temple following which the ‘veil would be removed’! And truly so, the lime coating on the Jagannath temple was removed after the event of a roof stone fell in the temple. Since 1999 the world is in the grip of Yama for a century and the tone was set during the decade 1999-2009. The Asvini Kumaras rush to heal the world in the coming decade 2009 -19, so let us make haste and heal wounds before more blood and tears wet the earth.

There are very many uses of the Saptarshi (28 nakshatra system) and what we have given is just the tip of the iceberg. You will know the real reasons for Sri Rama labelled as the Sun incarnation and Sri Krishna as the Moon incarnation. Also some details about Sri Narasimha as taught in the tradition, are mentioned. Knowing the devata is a tough job and this is where a bit of description comes in which is followed by Puranic lessons with copious jyotisha notes. In some ways this book is incomplete as we have covered only the first five (prithvi tattva) nakshatras. Through your support and good wishes, it will take its final form in the years to come.

Nakshatra Guna
Sunya nakshatra, Graha Janma nakshatra, Antaranga-Bahiranga nakshatra and Pata nakshatra have been covered in this part of the book. There are many other aspects to cover in this part in the future. While almost all astrologers are conversant with their usage in Muhurta, we have shown how they are to be used in horoscopy. The effects of mrityupada in sunya or karaka lagna in sunya or the manner in which relationships become void due to sunya in natal charts has been demonstrated with ample illustrations. The birth nakshatra of the planets themselves and their birth tithi cause some afflictions to accrue. For example the Janma nakshatra of Saturn is Revati and people born in Revati shall feel his pinch. Similarly, people born in Dhanishtha feel the eclipse of Mercury. Why is ekadasi so evil that even Jupiter turns his face away? Have you ever wondered why a ruby should be recommended for one born in Bharani nakshatra? It maybe crucial for them to wear one and save themselves from Rahu. This is what we learn from the graha Janma tithi and nakshatra.

Antaranga-Bahiranga nakshatra are the basis for the Ashtottari dasa and Sanjïa chakra is one of the most useful tools in jyotisha. We have made some very fine pointed readings using the pata nakshatra in horoscopy and share this in this book.

Nakshatra Purusha
Dimba chakra of Pandit Dhundiraja and one system of Nara chakra has been covered in this part. The specific use of Dimba chakra in timing longevity has been shown in addition to its general use in delineating character. For example how can we say that Hitler was a chronic liar? We have various combinations like second lord (speech) aspected by Saturn (untruth), but then it is also aspected by Jupiter (truth) and joins Venus (sweet talk) and Mercury (smart talk) and an exalted Sun (straight talk) and is also in own sign and navamsa. So how can we say which among these combinations – liar, truthful, partial liar or lies sometimes, is going to prevail? The dimba chakra points at his buttocks indicating that he is a liar. The Nara chakra which has been taught in this book is to be used with ‘only Vimsottari dasa from Moon’ and by the time you finish this chapter you should be able to tell exactly which part of the body is going to be damaged (if at all) in case of violent deaths. Illustrations of Mahatma Gandhi and Pramod Mahajan have been given.

The nakshatra purusha worship in the Vaishnava and Saiva traditions have been explained in some detail.

Nakshatra Yoga
In this part we have only covered the teachings of Brahmarshi Narada, which is the correct traditional way to first start learning about the nakshatra from the seers. We examine the placement Moon in nakshatra and pada. Some traditional advise is also included which helps to further the understanding of things like kala sarpa and amrita yogas and how another nakshatra can end up giving results instead of just the Janma nakshatra.

PAST AND FUTURE
Ten years back when we started to teach jyotisha in public forum, the astrologers behaved as if the word ‘arudha’ was a bad word, many wondering what we were talking about and others labelling it Jaimini Astrology. This was followed by charakaraka and karaka replacement, and other concepts like marana karaka sthana, curses study, omens and nimitta sastra, dreams analysis through charts and many such topics which seem like an endless list.

With the blessings of jyotisha guru Pt. Kasinath and the gayatri, we were able to lift jyotisha vidya in this world from the level of bhu loka to bhuva loka. In the next decade with the blessings of my diksha gurvi Sri Pravrajika Shraddhaprana we should be able to take jyotisha vidya from bhuva loka to svarga loka, the realm of the nakshatra. With this solemn pledge we prostrate at the most holy feet of Sri Sarada Ma.

During the course of this work a fire caused considerable disturbance and proofing and editing had been hampered. In subsequent editions we will take care of this. Kindly overlook and forgive typos.
Om Tat Sat Sriguru-Arpanamastu

Yama Calculations
Accurate Yama calculation The accurate method will use the sunrise time of the next day to calculate the duration of...
Introduction to Vedic Astrology
Basic Vedic Astrology Perhaps the first step in Vedic Astrology is to discard the idea that it is some kind...