Defining the titles of a Rishi
There are many prefixes added to Rishi to indicate their status or working levels. Brahmarshi is the name *Brahma* prefixed to show the creative process which starts with AUM and Jagannath, and the three Rishi’s for this knowledge that we all have are Gotama, Atri and Bharadwaj, the givers of AUM for which they are called Brahmarsi. So not the creative process with A-U-M has become threefold having A, which is Brahma; U which is Vishnu and M which is Shiva. Maharsi are the ten seers of maharloka who are progenitors of all creation after a pralaya and when the creation beings again! So Maharsi is working as Brahmarsi at Maharloka.

There are so many prefixes that can create some confusion as you can see above. Therefore, following in the holy footsteps of Parasara [Vishnu Purana] we arrive at the three basic titles of Brahmarsi, Maharsi and Devarsi. Do you recall my witing about creation and the two words we learnt i.e. how A-U-M becomes U-M-A due to the reversal effect.

(1) Agastya is known for his enormous creativity, having created the languages, scripts and incorporated the entire vedic literature into the south indian languages. Agastya was also known for his strength and he ate up and digested some rakshasa (demons) in a *tit for tat* kind of episode. He drank up the ocean when thirsty and fishes leapt around crying for life! None knows medicine better than him nor the ways to handle poison (Rk Veda etc).

(2) Durvasa is known for his terrible temper and thousands of disciples whom he taught and kept under strict disciplene – only Shiva could have done this. He is incarnated from the blessings of Shiva to Atri Muni. But Atri Muni is the giver of the AUM, and specifically the middle syllable U in the order of Gotama, Atri, Bharadvaja.

(3) Devarsi narada is a son of *Brahma* (so if we take birth as the factor) then some will argue that he should becalled Brahmarsi, but unlike manmatha and Rudra, he decided to remain celibate and thus left the path that Brahma wanted him to take and stuck to Narayana…like glue. So there is no doubt that he is the devarsi.

Teachings of Parasara in BPHS 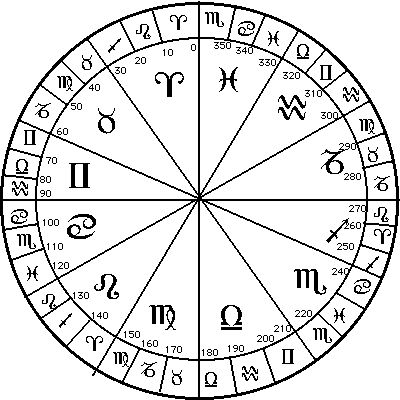 The translation of the word *parivritti* and *trayam* has been done differently by different authors to suit their purposes and in reality this is quiet encompassing. Just for good record, there is a drekkana chart which is called Parivritti Drekkana and is quite well known and accepted. You can check Tajik Nilakanti and my writings and those of the scholar Iranganti Rangacharya on this subject as well as that of Dr. B V. Raman.

The common understanding for parivritti is to “consider or cover the entire zodiac span of 360 degrees” based on its meanings as (1) “turning or a revolution” around the zodiac, (2) “return (into this world)” and (3) “surrounding , encompassing or covering” the zodiac. The word *trayam* means three or three-fold and to this there can be no dispute nor different opinions. Therefore, drekkana is the one-third part of a sign reckoned in such a way that it covers the entire zodiac of 360 degrees. There are four ways in which this can be done and are popularly called (1) Parashari drekkana (2) Jagannath drekkana (3) Somanath Drekkana and (4) Parivrittitraya drekkana, although from the exact writings of Parasara, it is quite evident that he has covered all these in his broad statement at sloka 7.

Sva is self, first sign or the same sign; panca means fifth and navama means ninth; it is evident that the first, fifth and ninth signs, in that particular order, are being advised from every sign. Krama means to step or move in a procedure. Therefore, the first, fifth and ninth signs from any sign are the three drekkana and based on this sloka 8 and the name Parasari drekkana has been given to the generally well known drekkana or decanate chart. For example, the three decanates measuring 10deg each for Leo would map to Leo, Sagittarius and Pisces respectively for the 1st (0 -10 deg) 2nd (10 deg – 20 deg) and 3rd (20 deg – 30 deg).

Next he says that Narada, Agastya, Durvasa (in that order) are the lords (poor translation of isa but will do for now) for chara (movable) and OTHERS. Should we interpret others as chara, sthira (fixed), dvisvabhava (dual or mutable) which is normally done? Then, Narada is the Rishi for movable signs, Agastya for fixed signs and Durvasa for mutable signs.

Logical derivation based on Birth and BPHS and dharma bhava 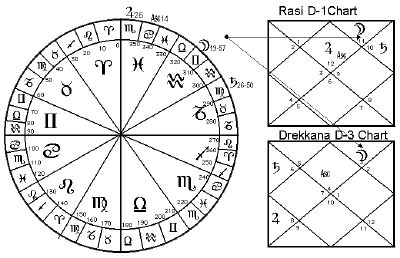 If we take the lineage or birth then this can easily fall in place – (1) Narada was the son of Brahma and hence movable signs are given to his care as Brahma indicates creation for which the movable signs have the energy or guna (2) Agastya, the ardent worshipper of Rudra/Shiva was the son of Rishi Pulastya and the fixed signs with low energy attributed to their fixity represents thes guna while (3) Durvasa was the son of Atri muni who is the giver of the middle syllable ‘U’ in AUM which represents the energy of Vishnu. Therefore this explanation fits the description.

However, we need to realize that the Rishi are actually the Pitris as they are the progenitors of all creation (and knowledge – Veda) and must have the pride of place in the ninth house to represent the Guru and father alike. Then when we say narada rules of the movable drekkana we refer to him as being in the ninth from the movable signs. The ninth from movable signs are the mutable (dual) signs which are having the energy of sustenance and therefore Narada is called Devarsi. By similar logic we can attribute the ninth from fixed signs (which are movable signs) to Agastya as he has a created whole universe of knowledge like Brahma. Similarly the ninth from mutable signs are the fixed signs and the anger of Durvasa matches this.

The vexed questions
All this is fine and we should follow but then a stage comes when we ask questions like what does the word ‘krama’ fully mean? Is it just regular reckoning like that for Saturn or is it based on the reckoning of Narayana? Then we arrive at a dilemma where the ninth sign from the samapada and vimsapada are going to be different. Then for Narayana dasa which is based on padakrama order, the reckoning of results of houses should also follow a different order for samapada and vimsapada signs. For this we go back to the two words “AUM” and “UMA” which hold the key to the answer. Again, the word used by Parasara is ‘chara and others’ which for the intelligent should cover both the groups of samapada and vimsapada signs. Therefore Narayana dasa is a different level of Jyotish altogether and should be studied with at least some knowledge of the Upadesha Sutra. Add to this the complexity of the word ‘parivritti-traya’ and the various alternatives to get a great puzzle that would require serious research to resolve.

When we talk of Narayana dasa, we talk of sustenance of everything that is created by Him. In the material universe, Guna is understood from the viewpoint of energy as well.

(1) Satva can be simply understood as perfect balance between energy supply and demand and thus the body continues in perfect or balanced motion. Satva guna is attributed to mutable or gual signs
(2) Rajas guna is the desire and hence power to create and shows the use of surplus energy which is available with movable signs. Rajas guna is attributed to movable signs and will continue to keep working or doing till the energy finishes. Thus, Rajas ends in Tamas guna when the fuel supply finishes.
(3) The reverse is true for Tamas guna which has no power or energy to do anything and is seeking energy to get activated and achieve its goals. Tamas is attributed to the fixed signs which symbolise lack of motion and low energy.

Q1. Why are we taking drishti into account? Answer: Because it shows the knowledge, desire and action towards things/objectives.
Q2. Why are we considering Rasi drishti? Answer: Because it does not have Iccha shakti and instead has only kriya and gyana shakti. That is why it doesnot
And, in Narayana Dasa or in Drig dasa, this connection between drishti (knowledge, desire and action ability) and ninth house (Narayana/Vishnu) is clearly made and has a sound basis on the Rk Veda – tad Vishnu paramam padam, sadaa pasyanti suurayah. Diviivah chayur-aatatam.

Now for the purpose of Narayana dasa, Drig dasa and every where we use rasi drishti, we should remember this changing of guna and accordingly in the Narayana dasha book, it is given as Agasthya related to Maharishi (sthira rashis) and Durvssa is related to Bhramarishi (chara rashis)

Russia-Ukraine War
Breaking News "Russia has launched an all-out invasion of Ukraine by land, air and sea, the biggest attack by one...
Sama Saptaka Concept
“Sama-Saptaka” means mutual seventh and refers to the placement of two ‘otherwise friendly planets’ in mutual one-seventh houses from each...
Bhava Sagara
[youtube aODy6QwBaTU]
Shiv Sena Party
Article examining the formation chart of the Shiv Sena Political Party.[Published 1998] The party is very strong in Maharashtra and...