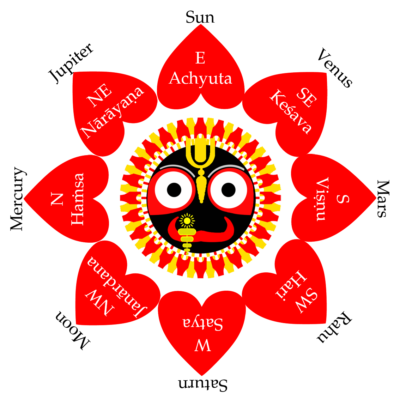 Viṣṇu aṣṭa nāma are the auspicious eight names of Viṣṇu for overcoming the blockages and weaknesses and passing the tests of life in the eight directions of success. There are areas of life called bhāva in jyotiṣa, that are always checked by Viṣṇu for sattva guṇa. If they fail the sattva test, then these bhāva shall fall.

For example, the second bhāva of food, wealth is called ‘Hari Bhāva’ (as in Hari-Hara-Brahma Yoga). If Saturn is in the second or associates with the second lord, then the native is always tested for truthful speech. If this is also the ātmakāraka then this test is very severe and like Dharmaraja Yudhiṣṭhira one must be painfully truthful all the time, even if it means being politically incorrect. Sagittarius lagna have Saturn as the second lord and are known to be very truthful and direct in their speech. In the aṣṭa-padma the west direction is ruled by Saturn and the name of Viṣṇu is ‘Satya’. He is worshipped with the mantras –

Similarly, for other planets as ātmakāraka and associated with Hari bhāva (2nd house of food and wealth), one can use the other names of Viṣṇu.

Note that these are not used for kendra bhāva which, although Viṣṇu sthāna, are for the avatāra. The four faces of Viṣṇu in the east, north, west and south are Rāma, Kṛṣṇa, Varāha and Nṛsiṁha respectively. Alternatively, if the lord of the fifth or ninth bhāva is associated with an exalted planet then that particular avatāra can easily be invoked for benedictions. 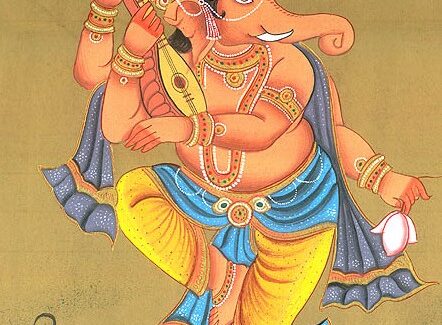 Ucchista Ganesha
This is the dancing form of Ganesha and the meditation etc, visualize Ganesha in a rather jovial, compromising mood. Ucchista...
Charlie Sheen
Mūla 1st Pada: Charlie Sheen Charlie Sheen was born Carlos Irwin Estevez and is a top Hollywood actor. He was...
Agni: The holy fire
Sri Agni is the adhidevata of the Sun and is the most revered deity of the agnihotri's and brahmins of...