Rahu is the Atmakaraka and is exalted in the 11th house with Mars the Yogakaraka planet. This is the VIJAYA YOGA when Durga is worshipped on Vijaya Dasami or DUSSHERA, the festival celebrating the slaying of the demon Ravana by Bhagavan Sri Ram. The Ista Devata or the guiding deity of any chart is seen from the 12th house from the Atmakaraka in the Navamsa called Karakamsa. Rahu is in Capricorn Navamsa and MOON & Venus are in the 12th house showing that the guiding deity is a feminine form. Between Venus and Moon, the latter qualifies as stronger in Sagittarius. Thus, there not an iota of doubt left that the Ista Devata of the Shiv Sena Party is DURGA and that Her specific form is VIJAYA or CHAMUNDI. The party will naturally adopt its symbols and the tiger; Her Vahana (vehicle) will form the symbol of the party. The party can be rejuvenated and strengthened if its leaders worship Durga everyday in the evening with the most powerful Navarna Mantra. For the readers benefit, I am giving the mantra: ॐ ऐं ह्रीं क्लीं चामुण्डायै विच्चै [om aiṁ hrīṁ klīṁ cāmuṇḍāyai viccai]

Vimsottari dasa indicates the periods of public popularity and hence rise. The Jupiter dasa from 1982 to 1998 saw the party gradually rising to power and making its presence felt both in Maharashtra politics as well as in the central Indian politics. Jupiter is the ninth Lord both in the Rasi and Dasamsa and promises fame and power in the fifth house of the Dasamsa Chart (D-10). The Darapada (A7) shows political partners or Karma Sthana partners and here we see Jupiter in the fifth promising a powerful and Dharmic partner in the BJP (Lotus-Jupiter).

The advent of Saturn dasa in 1998 resulted in the Sena losing power in Maharashtra as Saturn is the malefic 7th & 8th lord and is placed in the sixth house from Lagna and fifth from the Moon. It is noteworthy that there are two Vipareeta Rajyoga in the placement of Saturn as eighth lord in the sixth house and Mercury as the malefic twelfth and third lord in the eighth house. Mercury is not only placed in the eighth house from Dasamsa Lagna, but is also in the third house from Saturn. All these mutual ill placements strengthen the Vipareeta Rajyoga results. This will function during Mercury antardasa in Jupiter dasa, which is from July 2001 to April 2004. During this period, due to sheer good luck the party shall gain considerable political mileage through the mistakes made by its competitors as well as their ill health or death (eighth house results). Around December 2001 to February 2001, in the Ketu antardasa there will be a sudden spurt of events resulting in major political changes as its leadership base is strengthened. Just like the worship of Ganesh leads to the love of Shiva, the Sena will rejuvenate its youth wing by inculcating spiritual discipline and intellectualism among its younger followers. This will pay a rich dividend in the years to come, especially after 2009 when the party will be in its greatest glory with this new third tier leadership proving it worth in all activities like business, literary and entertainment. The presence of the Moon (Ista Devata) with Yogakaraka Mars (lord of power 5th house and success 10th house) shows the gradual molding of its cadre (5th house) to form new leaders (10th house).  It is necessary for the party to focus on the needs of elder women and mothers (Moon). The sudden political changes during Saturn dasa Mercury antardasa will help the party to improve its position, but consolidation and power will come only at a later date i.e. after Ketu antardasa begins.

Forms of Yama
Depending on the planet becoming the Yama graha, the deity Yama assumes one of the eight forms. Sun: Vaivasvata or...
Disclaimer
Term of use of website SRath.com 1. This is a Contract This (including any modification/alteration/change/deletion in this Agreement from time... 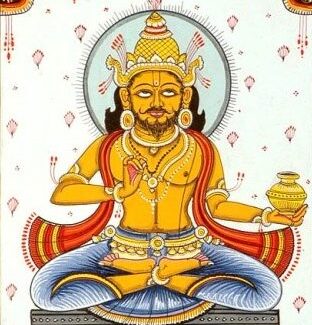 Bṛhaspati Kavacha Mantra
In jyotiṣa there is a saying that when Jupiter protects there is none that can destroy. Jupiter brings in the...
Arudha Pada: Images of World
Āruḍha Pada Āruḍha literally means mount and refers to the illusion (Maya) created by the reflection of a sign about...