Jack Labanauskas [em@guna.us], Editor of the Enneagram Monthly http://enneagrammonthly.com/ reports the final year and certification of the first batch of Jaimini Scholar program at page 2 of EM Issue 182.

After two months in a perfectly nice nice place on the edge of a little lake, in the Himalayan foothills with weather only matched by California or Hawaii, it was still east, west, home’s best. This trip turned out to be extremely productive towards finding connections between the Enneagram and Jyotish (Vedic) astronomy/ astrology. 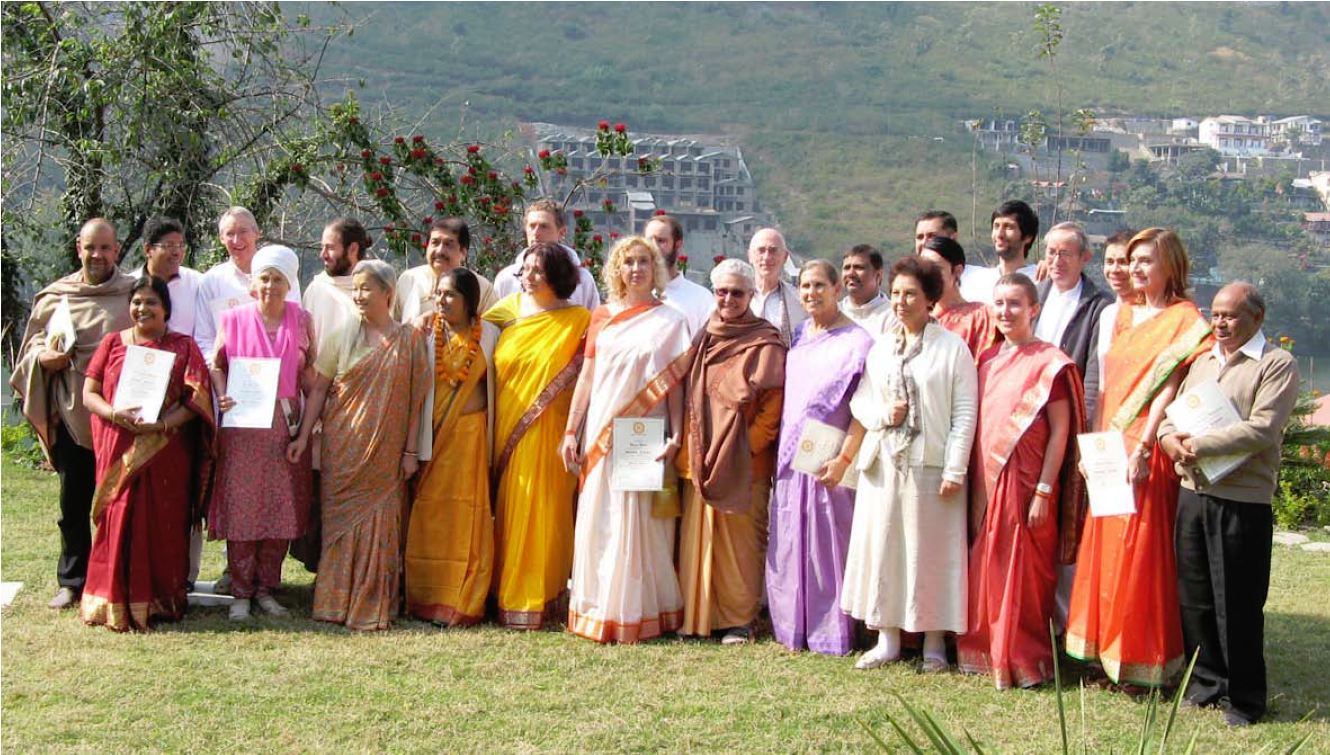 After five years of daily homework and yearly trips to attend month+ intensive retreats in India, Sue Ann McKean got her master’s degree as a Jaimini Scholar, (better her than me, I couldn’t have done it…) while I came along three of those years in search of links between Jyotish and the Enneagram. Well, to be honest, it was also fun hanging out with some of the scholars from various countries that had become good friends. But most rewarding was the time spent with our teacher, pundit Sanjay Rath and his wife Sarbani who is an accomplished Sanskrit and Jaimini scholar. Sanjay is widely respected as head of a venerated lineage of jyotishees and author of many books on that subject. He is also no slouch in things new, scientific or Western, given his degree in satellite engineering.
During our stays in India and whenever Sanjay and Sarbani came to California on teaching tours, we’d have discussions about correlations between the nine “grahas,” cosmic influences that affect our personality,
(as symbolized by the nine planets used in Vedic astrology) and the nine enneagram types. We have finalized the correlations to our satisfaction and to our surprise found that both systems can benefit from the
strengths of each. The Enneagram’s contribution is in the dynamic of the figure describing the movement of energies, while Jyotish offers a deeper understanding of the energies themselves. Furthermore Jyotish has
always had the thing that was missing in the Enneagram completely: the element of time! For example, how can we know when we are likely to make a move along the lines towards what we generally refer to
as integration or disintegration. Here too we found a way of predicting the timing and nature of these shifts. We are currently testing this theory and in a few months we hope to have worked out a technique that is practical and easy enough to apply without complex calculations.
As I have mentioned before, Jyotish is infinitely more complex than anything that has been written about the Enneagram since and including the Greeks, Evagrius Ponticus, Ramon Lull, Gurdjieff, Ichazo, Naranjo and others. But that’s not a fair comparison, since Jyotish stands on the shoulders of 3000-5000 years of sacred scriptures, many attributed to enlightened souls. The enneagram in its current form is about half a century old and considering that, we’ve come very far.

Viṣṇu aṣṭa nāma
Viṣṇu aṣṭa nāma are the auspicious eight names of Viṣṇu for overcoming the blockages and weaknesses and passing the tests...
Iran Islamic Republic
History Iran, historically known as Persia and officially as the Islamic Republic of Iran since 1980, is a country in...
Avatāra
[caption id="attachment_2023" align="alignright" width="236" caption="Avatara"][/caption] Avatāra The Sanskrit word avatāraḥ is derived from ava meaning ‘down’ or descent and tarati...
Prayers
[youtube http://www.youtube.com/watch?v=BNcSVH0fqiM?list=PLD1BBE5BA43CF75DF]