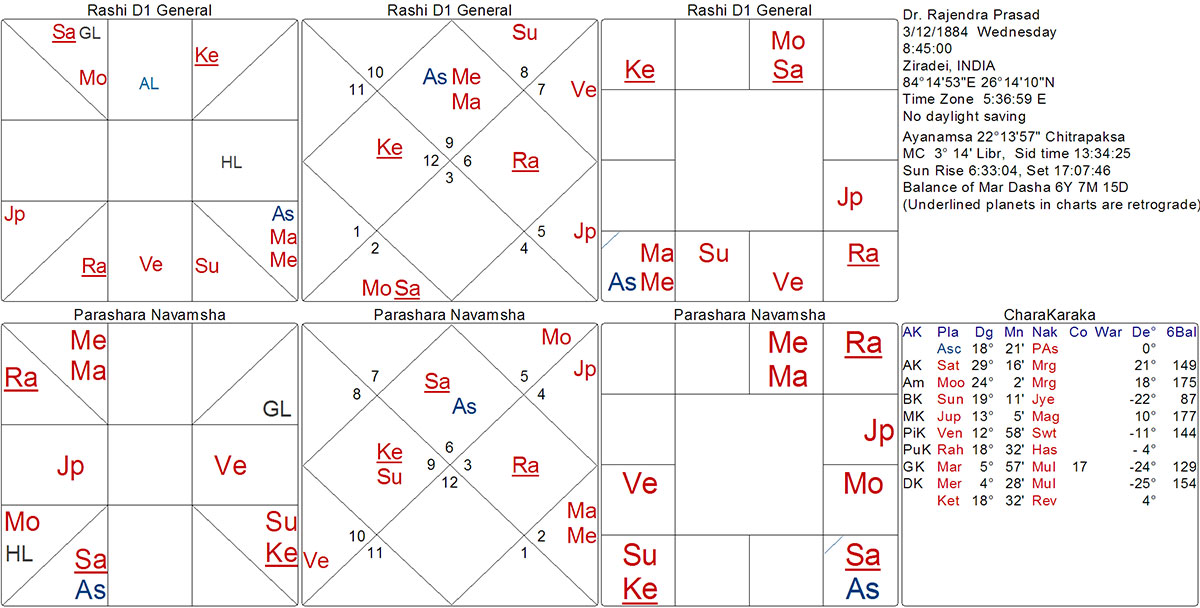 He was the youngest child of his parents.
Although the arudha lagna is in Aries, the opposite sign Libra is stronger with Venus and shall be the functional arudha for his life.
Siblings manifest from the eleventh bhava from arudha lagna (AL-Ar). Eleventh Lord Saturn is in Taurus. It conjoins exalted Moon (Male, elder brother Mahendra Prasad) and has the rasi drishti of Venus (Female, elder sister Bhagwati Devi Prasad).

A meritorious student, he received his early education from Moulavi, an accomplished Muslim scholar, who taught him Persian, Hindi and arithmetic.
It is evident that by 1884 the East India Company had successfully destroyed the traditional Gurukula education system in Bengal Presidency (Bengal, Bihar, Odisha, NE regions etc.). The Hindu families had no option but to send their children to Madrassa (traditional Muslim School) where a Moulvi (religious leader) imparted necessary education. At least the Muslims were strong enough to resist the British cultural destruction and were kind enough to allow the Hindu children to come to their school.
Education started in the dasha of Mars (conjoined digbala badhakesha Mercury – foreign, other culture) showing that a kind Moulvi made him adept at language (Me) and Math/Logic (Ma). Thereafter Rahu dasha started in July, 1891 and Rajendra Prasad was on his way to get his Doctorate. Rahu is extremely well placed in the tenth house in mulatrikona.
Later he studied at the Chapra District School and T.K. Ghosh’s Academy in Patna. For higher education, he moved to Calcutta where he secured a scholarship at the Presidency College, for a degree in science. Changing his stream of studies from science to arts, he received Masters Degree in Economics in Dec 1907 (Rahu dasa Sun antara). In Siddhamsa (D24 Chart), Rahu is the lord of 5th house placed in 12th house in mulatrikona Virgo having aspect on 4th bhava (education) whereas Sun is the 11th lord in D24-Lagna giving recognition and completion.

After receiving his MA (Economics) degree, he took up the job of English Professor at Langat Singh College in Muzaffarpur in Rahu dasa Moon antara.In dasamsa (d10 chart) Rahu is in the sixth house in debility and aspects the tenth house. Moon is in digbala in the 4th bhava and fully aspects the tenth house Pisces (Ju, educational institution). An exalted eleventh lord Mars conjoins lagnesa Mercury and uplifts him quickly – promoted as the principal of the Langat College.
In Siddhamsa (d24) Mars rules the houses concerning Masters and Doctorate education. He would not be satisfied by his MA (Eco) degree and resigning from his job as Principal of Langat College, he went to Calcutta for a law degree in 1908 (Rahu dasa Mars antara). In D24 Mars is second lord of Masters education whereas in dasamsa (d10) it is also placed in eighth house (resignation). Yet an exalted Mars in d10 will not keep him without work – he doubled as a professor of Economics at the Calcutta City College where studies MA (Law). In 1915 (Jupiter dasa Mercury antara), he graduated with honors in Masters degree in Law, winning a gold medal. Both Jupiter and Mercury are in the ninth house in siddhamsa giving a blessing-glance to Mars in 3rd house. However Mars is also the 7th lord and will insist on a Doctorate. Much later in 1937 (Saturn dasa Sun antara), he completed his Doctorate in Law from Allahabad University

With the advent of Jupiter dasa, in 1911 (Ju-Ju) while in Calcutta for his Law degree and working as Economics professor, he joined the Indian National Congress. Jupiter is mighty in the dasamsa (d10) as the tenth lord in mulatrikona Sagittarius in seventh bhava. However, he worked at the High Court of Bihar and Odisha (1916 Ju-Me) and was appointed as a member of the Senate and Syndicate of the Patna University (1917 Ju-Ve).
His active involvement in politics grew to a point where it became untenable for him to continue in his legal practice nor his University duties. With the Non-cooperation movement launched in the summer of 1920 (Jupiter dasa Sun antara) he quit his profession and took to politics. In the dasamsa Jupiter is well placed and pushes him to achieve. It is also placed in Leo in the rasi chart in the ninth house (guru/father) showing that he will stand by his guru (Mahatma Gandhi) and will be a true follower. Unlike others in the Indian Congress who misjudged Gandhiji’s suspension of the civil disobedience movement due to the violence, he stood by his mentor.  Further, the Sun leads Jupiter as the anitya-karaka for Lagna. In the dasamsa the Sun is in the 8th house forcing him to resign; it conjoins lagnesa Mercury showing him the path to government and administration and is conjoined exalted Mars making him very strong and fearless.
In fact, the first Satyagraha movement inspired by Gandhi occurred in Champaran district of Bihar in Apr 1917 (Jup dasa Ketu antara) and Dr. Rajendra Prasad with the power of Jupiter behind him was there to lead Bihar into a historic phase of India. Jupiter and Ketu are co-lords of Pisces the tenth house in dasamsa. Dr. Rajendra Prasad was arrested and so strong was the agitation that the civil judge had to release him. It was here that Gadhi was called ‘Bapu’ and ‘Mahatma’ for the first time. There is no doubt that if Gandhi became the father of the nation and is referred to as Mahatma, it was due to the unflinching faith and dedication of this ardent disciple. Everytime that Gandhi would be in some dilemma, Rajendra Prasad was there to stand up for him – after all you need a Jupiter (Sg-Lag Rajendra Prasad) to exalt a Venus (Li-Malavya Mahatma Gandhi). In 1934 (Saturn dasa Venus antara), he was elected the President of Indian National Congress in it’s Bombay session. Venus is the fifth lord (power) in dasamsa and is placed in ninth house (mentor). Saturn Venus continued and he was again President in 1935. 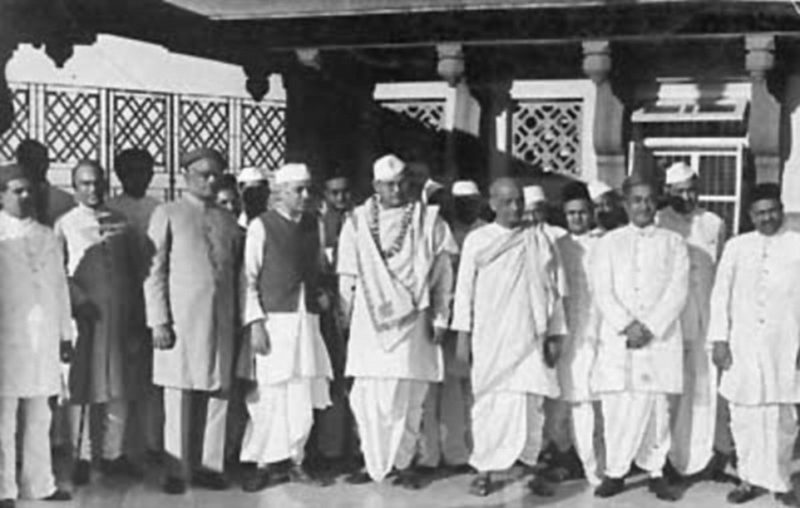 A great rift between Jawaharlal Nehru and Subhash Chandra Bose threatened to divide the Congress. Bose wanted direct action and freedom while Nehru wanted a pacifist approach and sharing power with the British. In the Congress elections of 1938, Bose squarely defeated the Nehru-Gandhi group and was elected as INC President. Again in 1939 Bose repeated his performance. Gandhi and Nehru could sense the power shifting to the east (Bengal) and the public mood shift from mere power-sharing to complete independence. Yet politics demanded that Bose must quit and Nehru wins – this was the first defeat of ‘democracy’ – elected president of INC had to resign to make way for the Guru’s candidate. Of course Nehru was smart enough not to take up the Presidency and instead, Rajendra Prasad rose to the calling of his mentor and in 1939 he again took up the responsibility (Saturn dasa Rahu antara) as the ‘fall guy’ for his mentor. We admire the guru-bhakti of Dr. Rajendra Prasad.

Just a minute Gandhi-ji! Why did you ask Bose to resign in 1939 when he demanded complete freedom for India? You just did the same thing in 1942!

This was a brilliant political move of Gandhi and caused differences between the Bengali/Odiya and Bihari people (Bose was botn in Cuttack, Odisha). Such a rift would ensure that another lion would never roar from the eastern horizon. Gandhi allowed a few years to cool things and bring the Congress together. When he was sure that this coherence was back in INC, in August 1942 he started the ‘Quit India’ movement! Rajendra Prasad was in Saturn dasa Jupiter antara and went headlong into the movement behind his mentor – going to jail and continuing the agitation. Jupiter was the opportunity that would lead to great success. He was arrested and jailed for almost three years – released on 15 June 1945 with the advent of Mercury dasa in Mercury antara.

Mercury is lagnehsa of dasamsa and is conjoined exalted Mars in a viparita rajayoga. Mars is 6th Lord in 8th house and Sun is 3rd Lord in 8th house – together they form Sarala Yoga and transfer this yoga power to Mercury, the lagnesha. Further, the dispositor of this yoga is Saturn, who is also anitya karaka for dasamsa lagnesha, and is stationed in exaltation in the fifth house of power and authority.
In the formation of Interim Government of 12 nominated ministers under the leadership of Jawaharlal Nehru, he was made the Minister for Food and Agriculture. Event date:2 Sep 1946 Mercury dasa Mercury antara Saturn pratyantara – dasamsa lagnesa and anitya karaka (dispositor) played this role. Soon on 11 Dec 1946 in the same period (Me-Me-Sa), he was elected the President of Constituent Assembly. He remained in this position till 26 Jan 1950.

On 26 January 1950, the Constitution of independent India was ratified and Dr. Rajendra Prasad was elected the nation’s first President. Dasa: Mercury dasa Venus antara Saturn pratyantara. One again we see the three trine lords of dasamsa working in harmony – Mercury is enjoying the full power of Sarala yoga. It has subhakartari of Venus (5th lord in 9H) and Jupiter (10th Lord in Sg in 7th house). Both Lagnesa and 5th lord Mercury and Venus are disposited by Saturn who is exalted in 5th house (power).
After serving the Indian Republic for more than twelve years as its President, he decided to retire in May 1962 (Ketu dasa Venus antara). In the dasamsa Ketu is co-lord of Scorpio (6th house) and Pisces (Ketu Mulatrikona, 10th house). It is placed in 12th house showing giving away or loss. Thus Ketu wil bring relinquishing (12H) of power/position (10th house, Pi) and/or end (12th house) of service (6th house, Sc). Further Ketu is in Taurus owned by Venus – hence dasa and antara was of Ketu and its dispositor.
He returned to Patna on 14 May 1962 and preferred to stay in the campus of Bihar Vidyapeeth. He was subsequently awarded the Bharat Ratna, the nation’s highest civilian award. 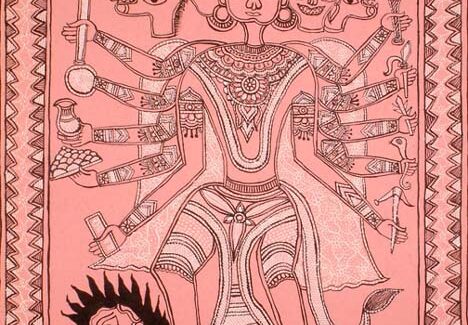 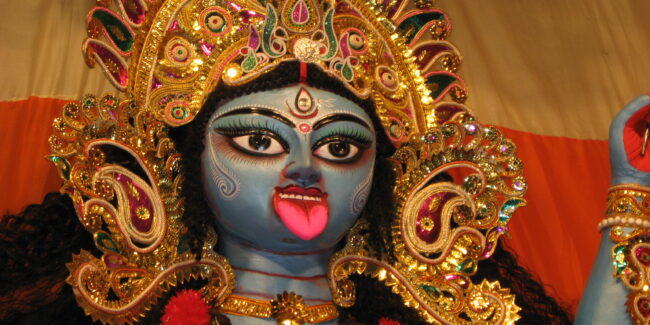 Eclipse Theory
SATURDAY June 26, 2010 PM: The Eclipse Factor in Charts Types of eclipses [not just solar-lunar] Who are affected and... 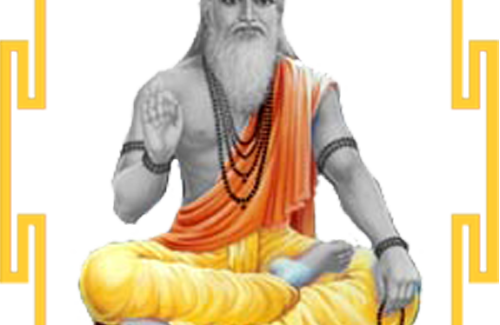