Austrian poet, dramatist, and novelist, Ingeborg Bachmann was a leading voice in post-war German literature. The prestigious The Festival of German-Language Literature which awards the “Ingeborg Bachmann Prize” since 1977 is named after her. During her lifetime Bachmann, was known first and foremost as a poet, but she ceased to write poetry in the 1960s and focused on prose. In these later works feminist themes came to the fore. Bachmann was a reclusive, but socially engaged writer.

In 1953 (Sun daśā Moon antardaśā), she travelled to Rome, Italy, where she spent the large part of the following years working on poems, essays and short stories as well as opera libretti in collaboration with Hans Werner Henze, which soon brought with them international fame and numerous awards. With the advent of Moon daśā in 1954 she started living in Rome. Moon is the 8th lord in lagna and conjoins the 12th lord (foreign residence) Ketu, which is also lord of the janma nakṣatra Mūlā. Moon promises undying fame and this will happen after she starts living and touring in a foreign country, just like Artemus Ward and others born in Mūla nakṣatra in Sagittarius Lagna.

Bachmann was appointed to the newly created position as chair of poetics at the University of Frankfurt (Age 33, Moon daśā Saturn antardaśā), where she lectured on poetry and the existential situation of the writer. Venus in maraṇa kāraka sthāna in 6th bhāva, although in own sign, did leave its sorrowful impact. Her relationship with the Swiss author Max Frisch who she met in 1958, bestowed the role of the second protagonist in Frisch’s 1964 novel “Mein Name sei Gantenbein” upon her. His infidelity caused the separation of the couple in 1962 (Moon daśā Venus antardaśā). The likely terrible impact on Bachmann could have been that she ceased to write poetry in the 1960s.

Ingeborg died on 17 Oct 1973 in hospital three weeks after a bedroom fire. The blaze was caused by an unextinguished cigarette in the night of 26 Sep 1973. Fire fighters found her unconscious and badly burnt with a third of her body having serious burn injuries. The 3rd bhāva from the āruḍha lagna (Aries) is Gemini which is occupied by Sun-Rāhu combination clearly confirming the immediate cause of death as fire[1]. Gemini is the bādhaka sign indicating death in a foreign land and as māraka bhāva it houses the planets that will furnish the mṛtyu daśā – Rāhu daśā Rāhu antardaśā.

For female nativity, the 3rd Pada is Jala tattva doṣa which points at Venus. She died in the śūla daśā of Taurus which is occupied by Venus and has the dṛṣṭi of Saturn, exalted but retrograde. Taurus is also the 8th bhāva from Kāraka Lagna Libra [Ātmakāraka Saturn]. Another aspect of gaṇḍānta is the ‘Tithī gaṇḍānta’ which we discuss later.

[1] Rumors have persisted that she did not succumb to the burns but to her long habit of compulsive pill-taking, which was prevented by the stay in hospital. This is quite absurd as nobody dies because they stopped taking a drug which is not a medication. The chart does not point to any such cause of death and instead the Rāhu daśā-antardaśā does indicate that there shall be such rumors. It just shows that her fans love her too much and cannot accept her sudden death.

Yama Calculations
Accurate Yama calculation The accurate method will use the sunrise time of the next day to calculate the duration of...
Introduction to Vedic Astrology
Basic Vedic Astrology Perhaps the first step in Vedic Astrology is to discard the idea that it is some kind... 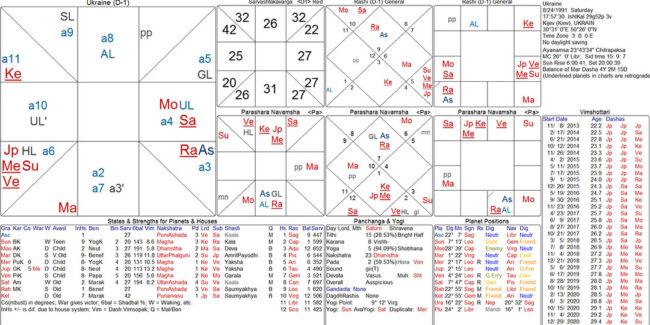 Ukraine UN-Peace Deal
The BBC reported that marathon peace negotiations have resulted in a new ceasefire deal for eastern Ukraine in the Belarusian...
Y.S.Rajasekhara Reddy
Don't count the years you want to live. Ask yourself how much you have done for society at large with...