that a new campaign launched in Tanzania aims to protect albino people after a rise in the number of them being murdered. In the last three years over 70 albinos have been killed, but only ten convictions have been made. There is a belief among some in Tanzania that the body parts of someone with albinism bring wealth. Salim Kikeke reports from Mwanza in north-west Tanzania
Watch BBC Video

The horror of a rapidly growing industry in the sale of albino body parts. This unimaginable evil is driven by the belief (in some areas of the country) that the body parts of PWA possess magical powers capable of bringing riches if used in potions produced by local witchdoctors for Albinism Related Attacks in Tanzania).
Detailed Document
Leaders in the albinism community believe that many of the attacks and killings remain undocumented and thus the numbers are likely much higher than our records show. While Tanzanian police first started documenting them in 2006, it is widely known that these witchcraft related assaults against PWA have been going on since time beyond memory. Reports also indicate that albino body parts are being exported outside of Tanzania. In one instance, a Tanzanian trader was caught traveling to the Democratic Republic of the Congo with the head of an infant with albinism in his possession. He told police that a businessman there was going to pay him for the head according to its weight.

Download PDF
In sub Saharan Africa, there has been a long standing and widespread lack of public awareness about albinism. Powerful myths surround albinism, including these:

As a result of these and other myths, many families do not bother to educate their children with albinism. Also, employers avoid hiring a PWA due to fears that their customers and staff will “catch” the condition, or that food would be contaminated. Sadly, in some social settings, many PWA are not offered the same kind of social & physical contact, due to this kind of misinformation. 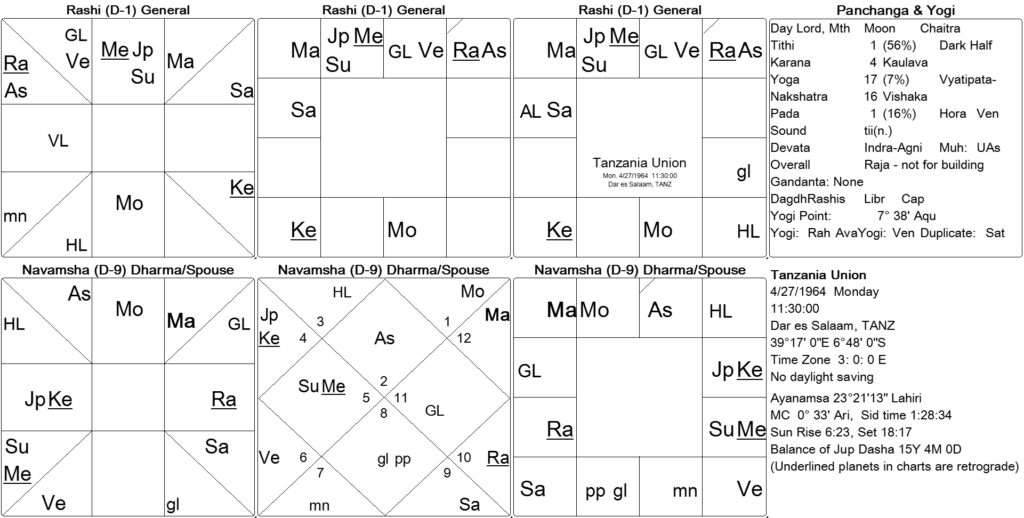 Moon trines to only exalted Rāhu in Lagna and Saturn in Kumbha rāśi (very high vāta) in 9th bhāva shows the predominance of dark faiths in Tanzania which brings about this misfortune among the people. Moon in the 5th does show caring and loving people, especially in Libra it shows the population is oriented towards trade and normal life. Yet we cannot ignore the exalted Rāhu in Lagna which makes the Sun a very malefic planet, anywhere in the chart. The maleficence of the Sun is transferred to the planets it conjoins or the houses it aspects. In this case Sun in the 11th bhāva is aspecting the 5th bhāva of people. From the 5th bhāva it is the bādhakeśa conjoining Mercury and indicating not only a huge incidence of Sūrya doṣa (skin diseases of various kinds that causes albino).

Sun is in the 1st Pada of Bharaṇī nakṣatra

Although it may seem to be a very good placement of the Sun with Mercury and Jupiter, actually there is graha yuddha between Sun (13°44’) and Mercury (13°51’) in Bharaṇī nakṣatra 1st pada. Jupiter also takes a beating being combust at 10°15’. Both these benefics are blocked by two malefics Mars and Saturn in the preceding signs.

In addition, the 5th Lord Venus is in the 12th bhāva, although in its own sign, indicating Sūrya doṣa as this is one of the bhāva signified by Saturn. Saturn signifies three bhāva – the duṣthāna namely

Venus is also subject to a terrible pāpa kartari yoga between Rāhu and Sun, which is a grahaṇa yoga showing a kind of eclipse enveloping the lives of the people. They live in great fear for their lives and all sorts of black magic and evils rule the roost.

Finally, almost all the planets are in five signs from the 9th house Saturn (spirituality) to the 9th Lord Rāhu forming a bad graha mālikā – in fact it is a garland of thorns. Ātmakāraka Mars, although vargottama, is quite helpless in this scenario. Jupiter, Mercury struggling to deal with their combustions and emasculation by the Sun while Venus is too caught up trying to run away to a better life in a foreign land. 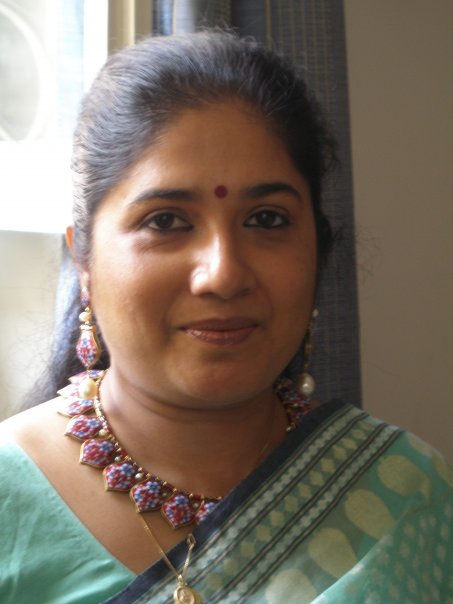 Sarbani Rath
Sanjay and Sarbani tied the knot amidst blessings from their parents, family and friends. Sarbani has put together some of...

Rahu and Eighth House
This article was published at The Jyotish Star There can be nothing more fearful than the 8th house which is...
Narayana Dasa – Extracts
Extracts from Narayana Dasa book (c) Sanjay Rath Erstwhile USSR There were two revolutions in 1917 in Russia. The first...