In Sanskrit he is more appropriately called हनुमत् (hanumat) which means “one having mighty jaws” indicating the power to bite and hold on to the task – a symbol of determination. He is vānara (monkey) and one of the most celebrated of a host of divine ape-like beings, created by the blessings of Nārada, to become the allies of Śrī Rāma in his war with Rāvaṇa.

Jayanti refers to the celebration associated with any deity in Hinduism. It is a birthday, but the Hindu have several birthdays – one is their birth in a lunar calendar called Janma Tithi while another is a solar calendar which is in some sort of sync with the Gregorian calendar.

Mārgaśira Amāvāsya Jayanti
The first jayanti is the janma tithi. Tithi refers to the jala tattva in pañcāṅga which resonates with the mother. Celebration of one’s janma tithi is really a mark of respect for one’s mother who not only passed through nine months of carriage but also the pangs of labour and all the sacrifices and unconditional love to see us become fit for life on earth.
Śrī Hanuman was born in the month of Mārgaśira (Dec-Jan nowadays) in Amavasya tithi (Kṛṣṇa pakṣa). Therefore the first jayanti which is the janma tithi is celebrated in Mārgaśira K30 amāvāsya. Tamil Nadu and Kerala are known to celebrate this date as the Hanuman jayanti.

His mother name was Aṅjanī, an incarnation of the fabled Mahāvidyā Bagalāmukhī, the mother of ‘Mars’. It is believed that whosoever calls Hanuman through his mother shall be granted unquestioned protection, even if he is pursued by the infallible arrow of Rama! Here is that powerful mantra for this shield of Hanuman. It is the real kavaca in Kali Yuga.

The second birth called dvija, is the receiving of the sacred thread or a mantra that initiates them into religious life as a Hindu. This is the second Jayanti. The mantra is the protector and giver of long life. In jyotiṣa longevity is associated with the wind (breath, prāṇa) and in the pañcāṅga, the breath is in the janma nakṣatra. Now while Hanuman was born in Mārgaśira Kṛṣṇa Amāvāsya tithi, the Moon was also in mūla nakṣatra. This nakṣatra is the janma nakṣatra of Hanuman. Janma nakṣatra is associated with the prāṇa (life-force) and father who sacrifices his prāṇa to infuse life into the baby. Celebration of one’s birthday on the janma nakṣatra is carried out in various traditions for long life and blessings of lineage.

Hanumat was a son of Pavana (Māruta, the Wind god). By virtue of his birth and accomplishments, he had various siddhi including the capacity to assume any form at will, removed mountains, fly like a bird by leaping across huge lengths in the air, jump into and seize the clouds, and rivalled Garuda in flight. Other people of Tamil Nadu worship Hanuman on Mūla nakṣatra day with the “vāyuputra” mantras:

However both father and mother can be worshipped if the Mārgaśira amāvāsya also happens to be Mūla nakṣatra:

The third birth is the date of enlightenment, which happens only for a very few who are destined to become world teachers. These are Gautam Buddha, Guru Nanak Dev, Hanuman, Dattātreya and Kṛṣṇa Dvaipāyana (Veda Vyāsa) etc., who birth into a new reality where they no longer have any association with their pasts and are fully enlightened. Hanuman Jayanti is also celebrated to commemorate this third birth of Hanuman as fully enlightened Guru. The date is the full-moon (pūrṇimā) of the month of Chaitra (Mar-Apr) called Chaitra Pūrṇimā. Tulsidas starts the famous Hanuman chalisa with the line “śrī guru charaṇa …” referring to this form of Hanuman as a great teacher of vedic knowledge. The mantra to worship him for vedic knowledge is the Hanu-mukha vedamūrti mantra:

Yet another kind of Jayanti is the investment of a great responsibility like coronation of a king or the appointment as a prime minister. This is a new karma birth and is yet another jayanti. The date of coronation of the local king is used by all astrologers to mark the horoscopes of subjects as being born in so-and-so year and date of the kingship. Of these kings, the most important is Śrī Rama Himself and every year, the Chaitra Śukla Pratipada chart is drawn to determine what lord Rama wishes for the year. This is the chart applicable for the world and is drawn for different capitals. The moment of ingress of the new lunar year is the manifestation of Viṣṇu himself i.e. Rama. The first saṅkrānti following this Śukla Pratipada is the Vaisakha saṅkrānti or Meṣa (Aries) saṅkrānti when the Sun enters Aries. This is the date for the appointment of the Prime Minister for the year. Hanuman is the Prime Minister of Rama and hence this date of Meṣa saṅkrānti is celebrated in Odisha and some places as Hanuman Jayanti to commemorate Hanuman as the Prime Minister of Rama. They sing the rāmadūta gāyatrī – 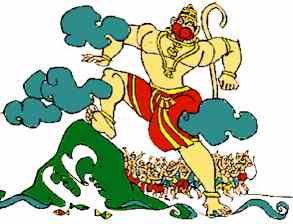 There is a moment when one suddenly awakens to one’s true calling. This happened when standing on the shores of south India, Hanuman knew that Rāvaṇa was across the ocean in Lanka and he had to ascertain the whereabouts of Sītā for sure. Hanuman awakens to his true calling and all his powers as being Rudra-avatāra are realised. He assumes a gigantic form and leaps into the air with a bone-chilling war dry in the name of Rama. The trees uprooted from the mountain follow him for a short distance. The entire description of this moment, given in the Ramayana, is very thrilling. There is no task which is impossible for him. This Rudra-avatāra jayanti is celebrated in Maharashtra on a day of Śiva – kṛṣṇa caturdaśī (K14) in the lunar month Aśvina. This is after Dusshera (navarātri).

He is an incarnation of Śiva as well as a son of Śiva in the sense of an avatāra – hence is is called ‘Rudra-avatāra’ and extolled as such in some mantras, particularly the 11-syllable mantra from Mahā-Nārāyaṇa Upaniṣad.

Knowledge, persistence and purity are the keys to success. This comes from the five faces of Hanuman as a complete incarnation of pañca-brahma-mūrti Sadāśiva. Various mantras for various kinds of knowledge relate to the five-faced Hanuman which is like the five-faced Śiva (pañca-brahma-mūrti). The tenth day is always celebrated for success and in particular the tenth day of the Aśvina māsa is celebrated as Dusshera when Durgā killed Mahiśasura or Rama killed Rāvaṇa.

Vaisakha kṛṣṇa daśamī gives various mantra siddhi and the pañca-mukha Hanuman is particularly worshipped for protection from black magic, evil spirits and ghosts. In parts of Uttar Pradesh, Uttarakhand, Odisha and middle India, this is prevalent. The mantras given below should be learnt from an able teacher.

These five mantras can be done for the correction of the five tattva of the trimsamsa which brings various evils upon us. The mantra is in the tattva order: agni, pṛthvi, vāyu, jala and ākāśa. 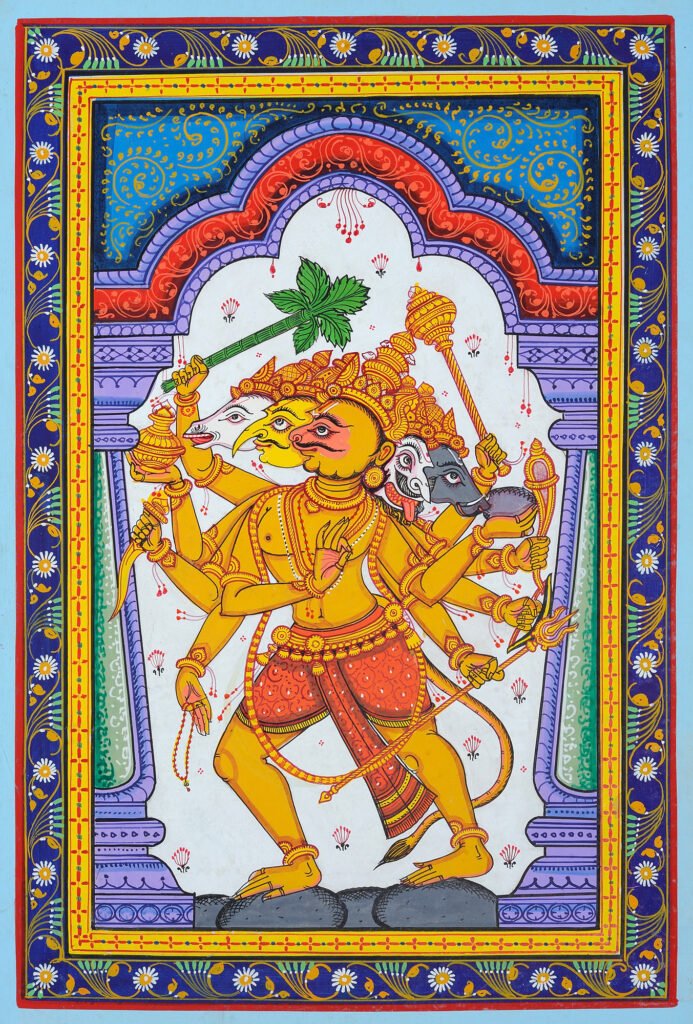 Forms of Yama
Depending on the planet becoming the Yama graha, the deity Yama assumes one of the eight forms. Sun: Vaivasvata or...
Śrī Someśvara Kumbhabhisekam
Śrī Someśvara Temple is being built to stand for a millennium.  The inaugural ceremony will be a profoundly auspicious event, said...
William H. Rehnquist
1924-2005: Chief Justice of United States of America Biography Chief Justice William H. Rehnquist is born in Scorpio lagna with...
L.K.Advani ~ Tapasvi Raja
Tapasvi Raja [caption id="attachment_398" align="alignleft" width="300" caption="Lal Kishan Advani"][/caption] The horoscope of Shri L K Advani has been slightly controversial...