Above is the chart of His Holiness the Sankaracharya of Kanchi Kamakoti peetham. Capricorn rises with a powerful Saturn & Moon conjunction in the second house. This combination in the 4th, 10th & 11th house gives Rajyog and in the 1st/10th house in Cancer can give Maharaj yog. In other trines it produces Kali Yoga (i.e. the person has to face a lot of strife & hardship and by worshipping Maha Kali Rajyog results). In other house this can cause Pravrajya yoga. Saturn is not only the dispositor of the moon, it is also the strongest influence on the moon in the house of wealth. This is the pravrajya yoga that will make the native (Saturn is the Lagna lord: self) to renounce wealth and all possessions. Since this placement of Lagna and 7th lords causing Sani- chandra yoga is also in the 12th house from Arudha Lagna, it will destroy all attachments to personal wealth. The 8th lord from Lagna (Sun) is in the seventh house showing poverty (personal). The 8th lord from Lagna / Arudha Lagna aspecting the Lagna/ AL or conjoining the 7th house from it gives poverty. Venus the naisargika karak for happiness and the worldly comforts is in the 8th house- a combination seen in the charts of many renunciates, monks (sanyasis). The Darapada (A7) is in the 9th house but its lord Mercury is in the 6th house (denial) with Ketu (renunciation / Moksh). Thus, the native renounces physical contact with opposite sex in any form or manner. The Upapada (UL) is in Leo in the 8th house, and in the 6th house from Arudha Lagna. The Upapada has Yogakaraka Venus, but its lord Sun is placed in the 12th house from it. Thus any question of marriage in whatsoever form is ruled out. The 2nd lord from Upapada (Mercury) is placed in the 6th house with mokshkarak Ketu. This denies marriage bonds altogether.
The deity to whom the native shall have personal attainment is seen from the trines in Vimsamsa (D-20 chart).

Sun (Surya / Siva) and Jupiter (Guru/Siva) are in the trines to Vimsamsa Lagna showing personal attachment only to Shiva. This will make the native service oriented and he will do a lot of work for moral upliftment of masses (Shiva worship makes a person open hearted and Sani Chandra yoga in Rasi chart makes a social worker). The Atmakaraka is Jupiter and it shall dominate the affairs of the native. In the Rasi Chart, the darakarak Rahu is very inimical to the Atmakaraka and is placed in the 3rd house from AK and 12th house from Lagna, thus denying marriage. Being in Bhagyarudha Rahu destroys any desire for personal fortune as well. However as the lord of bhagyapada (A9) Jupiter gives fortune through renunciation.
It may be noted that the Navamsa lagna rising is in the 12th house (place of worship) from the Atmakarak Jupiter . Thus , the native himself is revered and worshipped. This combination will be seen in the charts of big Saints who will be worshipped during their lifetime and even after their nirvana (e.g. Ramakrishna Paramhansa, Swami Vivekananda etc). Secondly, the lord of Navamsa Lagna itself is the Atmakaraka. However, it is not placed in Navamsa Lagna. Thus the native shall not be born in a Royal family but will attain a very high status. The moon is in the 9th house in debility in Navamsa (Rajbhang Neecha Yoga – Renunciation) and aspects the Karakamsa and lord of Navamsa Lagna Jupiter. This gives a lot of popularity and many people will love Sri Jayendra Saraswati.
The Dasamsa (D-10) has a watery sign Scorpio rising, and Jupiter & Mars are in mutual aspect in the 6th – 12th axis. This Guru- Mangla Yoga for a watery sign rising in Dasamsa is a clear-cut combination for headship of the Sri Kanchi Kamakoti peetham (the Sankaracharya math at Kanchi). The conjunction of the luminaries Sun & Moon as the 10th & 9th lords respectively produces the highest Dharmakarmadhipati yoga. This conjunction in the 5th house (of authority, subordinate, followers etc.) gives the divine power to remove the evils and enlighten anybody / everybody. The conjunction of the mokshkarak Ketu with his Rajyoga in the spiritual sign Pisces speaks volumes about spiritual height of Sri Jayendra Saraswati. It is noteworthy that this powerful combination for enlightenment is in the 12th house (worship) from the Atmakaraka.

The renunciation of Sri Jayendra Saraswati is timed from the Drig dasa and the Arudha Lagna. The Drig dasa always commence from the ninth house (Sloka 2.4.23 of Upadesa Sutra of Maharishi Jaimini). Thus, the renunciation of Sri Jayendra Saraswati should be expected to have occurred during the Drig dasa of the Arudha Lagna (Pisces) during July 1950 to July 1955. The antardasa would be of the eight house / Lord Sun that is Vargottama in trines to AL. The Sun is also the lord of the Mantrarudha (A5) in Leo. The renunciation occurred in March 1954 in Pisces dasa Cancer antardasa. In Vimsottari this occurred just before the advent of Jupiter dasa. 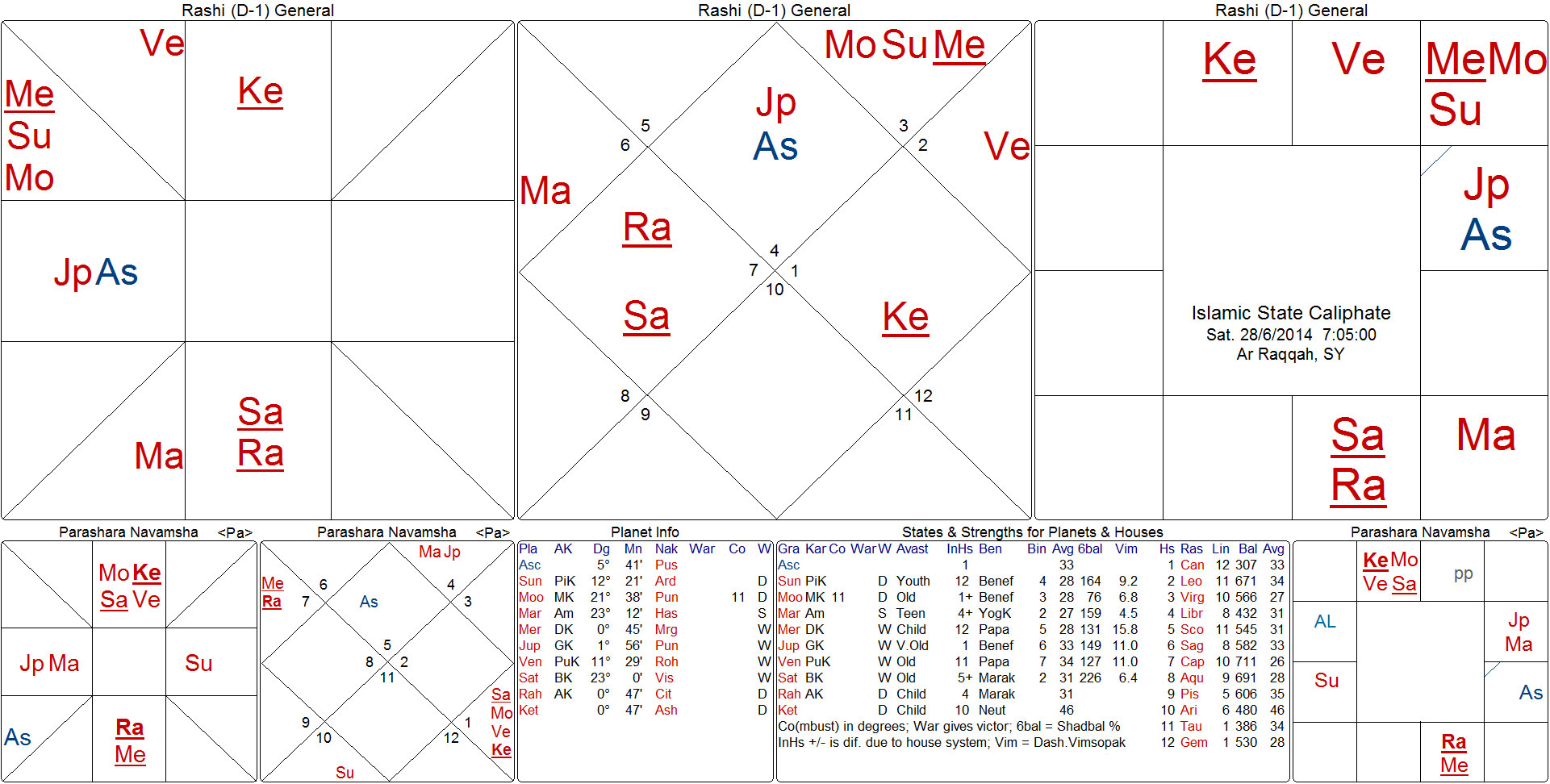 ISIS Caliphate
From the ISIS Lagna chart (previous article), it was obvious that they are trying to establish a kingdom as the...
Sambandha
Paper on Relationships presented in SJC, USA 2005 Before venturing into delineating relationships between two individuals or group dynamics, we...