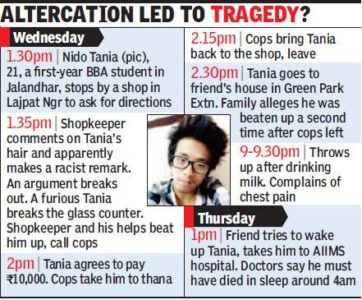 I was horrified to read that a young student, a teenager kid, had died due to his hairstyle! Delhi has become a bad place, but this is the limit, the pits. People get killed every day for various reasons normally around the three W’s (wealth, women and wine or rather drugs these days) but to die due to hairstyle is unheard of, it’s the pits – shows the murky level to which our society has fallen. The planet ruling ‘hair’ is Ketu and Saturn normally indicates the dead or cut hair. Hairstyle or hair colour is definitely Ketu influenced by some other graha. Nido Tania, a first year (18-19 year old) student of Lovely Professional University, and son of Arunachal Pradesh MLA Nido Pavitra, was beaten to death by six to seven people led by a shopkeeper in New Delhi after a quarrel on January 29, 2014 at 1.30pm. Nido Tania died in AIIMS on Thursday or was brought dead.  His body had more than 40 injury marks although the Primary Pre-Medical report has ruled out death due to injuries. 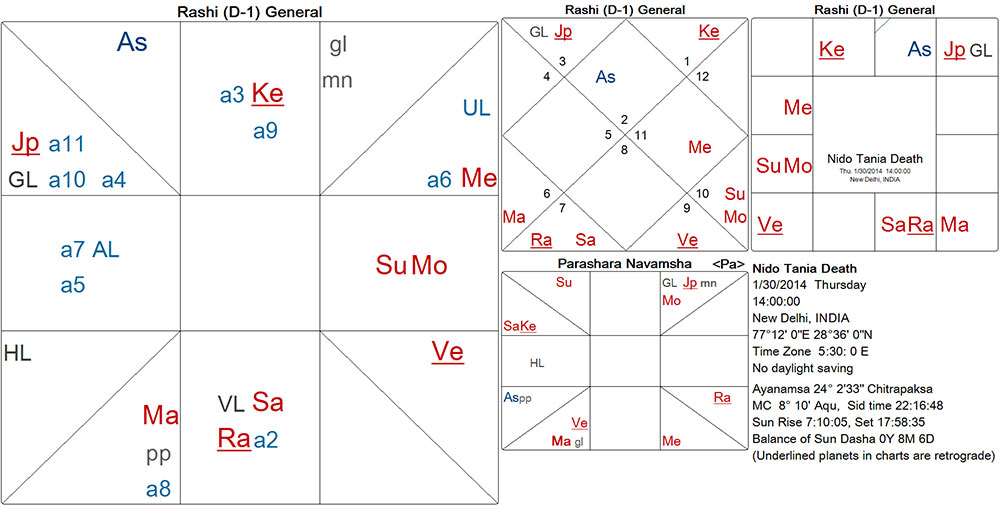 Taurus Lagna with Venus in 8th house (danger) with the Moon in chandrāṣṭama doṣa (Maraṇa Kāraka Sthāna) showing the danger of death. Mars aspecting this chandrāṣṭama Moon indicates the trigger – a glass top of the counter was shattered by the boy when he was teased by the shop assistants for his hairstyle. Ketu in the 12th house (final end) is aspected by Mars bringing in piśāca doṣa of sorts. Mars and Ketu jointly influencing the 8th or 12th house in rāśi chart can show danger of death. Enemy is in the 6th house – Libra showing the Market Place. Saturn shows a servant i.e. the shop assistant who is aided by many ‘Rāhu’. Some astrologers would say that this combination can indicate people of a different religious community as well. The malefic planets aspecting the chandrāṣṭama (intention of giving death) are Mars and Saturn showing that metal rods were used like a spear and sticks (clubs- Saturn).

The local police was called in, who took Nido Tania to the police station, and later released him, after the youth paid a fine of ₹ 7 or 10,000 as compensation. Jyotiṣa: Ketu which is placed in the 12th bhāva (expenses, losses) aspected by 12th Lord Mars by graha dṛṣṭi. Chandrāṣṭama with the lagneśa indicates instant death. Nido did leave the venue seeming fine but when he slept, he never woke up. He was admitted to AIIMS the next day when his roommates discovered that he was not awakening till 2.00pm. His heart was not beating. They took him to AIIMS but was declared dead.

3 thoughts on “Murdered due to Hairstyle” 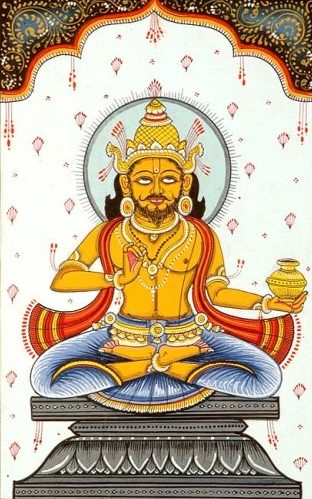 Bṛhaspati Kavacha Mantra
In jyotiṣa there is a saying that when Jupiter protects there is none that can destroy. Jupiter brings in the...
Atmakaraka II: Bhagavat Gita
Continued from Ātmakāraka I Bhagavat Gītā: A few years ago when we were asked about the standard books for studying...