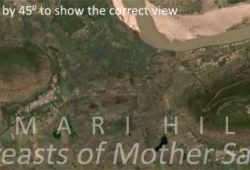 The tradition of Shakti worship in India can be traced back to the period of antiquity. Shakti is the mother of Universe the highest primal power transferred to powerful Goddess representing the creative force, Matrika, later developed to Shakti or Prakriti under various names of Sati or Devi (Durga / Parvati)ad depicted in Puranas and other historical books of classical tantra literature.

This is the powerful 99 syllable mantra of the das avatāra with Śrī Narasiṁha deva as the principal deity (Iṣṭa devatā).

“This Mysterious Beatle” George Harold Harrison needs no introduction. The date and time of his birth as recorded are 25 February, 1943; 00:05’ BST; (-1Hr GMT); Liverpool, U.K. Later this was ‘corrected’ by an astrologer. He wrote, “For instance, I only learned recently after all these years that the date and time of my own birth have always been off by one calendar day and about a half hour on the clock,” reported in Billboard magazine, 12/1992.” On a prior occasion, he had given out February 25, 1943, 00:05 AM GDT, (23 minutes later).

A New Finding by Chandrashekhar Chattopadhyay
(Translated from Bengali by Swami Chetanananda)
4th July 1902 was a memorable day. Swami Vivekananda, a great prophet of modern India, passed away at about 9:00 pm while he was in meditation. The flame of his life-lamp, which brightened the spiritual world, suddenly blew out in the deep darkness of night. The next morning this sad news spread throughout Calcutta and all over India. Swamiji’s disciple Kanai Maharaj (Swami Nirbhayananda) came to our house in Ahiritola and gave us the news. I was then busy performing worship in a temple nearby.

Above is the chart of His Holiness the Sankaracharya of Kanchi Kamakoti peetham. Capricorn rises with a powerful Saturn & Moon conjunction in the second house. This combination in the 4th, 10th & 11th house gives Rajyog and in the 1st/10th house in Cancer can give Maharaj yog. In other trines it produces Kali Yoga (i.e. the person has to face a lot of strife & hardship and by worshipping Maha Kali Rajyog results).

There are no shortcuts, no simple roads, no crash courses nor any magicians tricks for those who seek the true light of God and Jyotish is the means for the blind souls to find some direction in this otherwise dark world. I found myself confronted with the thought that if God is everywhere, in all beings, then how is it that he can have a form? If He did have a form, then how could He fit into these so many bodies simultaneously unless He was so tiny, smaller than the smallest particle or atom ever conceived.